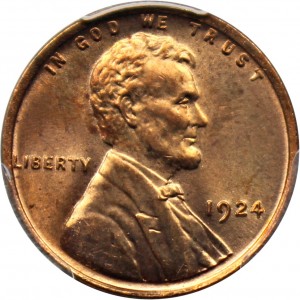 If you know anything about United States coinage, you probably know that the penny is not exactly the most sought after coin. While this might be true of the modern one-cent coin, the 1924 Lincoln penny is incredibly popular amongst collectors from all over the world. Thanks to its age and historical significance, collectors will stop at nothing to get their hands on this coin.

As for what the coin looks like, the obverse of the Lincoln penny is none too different from the modern version. In the center you will find the profile of Abraham Lincoln. To his left and right, respectively, you will notice a raised inscription of the word “Liberty” as well as the 1924 year of minting. Arching across the top outer edge of the coin are the words “In God We Trust.”

On the coin’s reverse the “One Cent” face value is spelled out in the middle. Beneath the face value inscription is one that reads “United States of America.” On both the right and left sides of the reverse there are two single stalks of wheat, which probably explains why the coin is sometimes called the “Wheat Penny.” Finally, the Latin phrase “E Pluribus Unum” is spelled out across the top.

For collectors, the grade of a 1924 Lincoln penny means everything. Not only does the grade help a collector determine how much a coin is worth, it also aptly describes the condition the coin is in. Thanks to these coins being decades old, the grade becomes even more important. Below is a brief outline of the different coin grades as well as what the grade means for a 1924 Lincoln.

Uncirculated: A coin that is graded as being Uncirculated has, quite literally, never spent any time in circulation. From the moment it was minted these coins were put into safekeeping and remained there throughout their entire existence. As such, there is not one single flaw that can be noticed.

Extremely Fine: A coin worthy of the Extremely Fine grade is one that might have a single imperfection or two, but will look mostly pristine otherwise. Apart from a small scratch or chip there will be almost nothing wrong with these coins. As such, this is one of the grades that collectors scramble to get their hands on.

Fine: A Fine 194 Lincoln penny is one that will show ample signs of wear and tear, but not so much that the raised aspects of the coin will have been compromised. From the detail of Lincoln’s image to the 2 wheat stalks, everything will be able to be made out with the naked eye.

Good: A 1924 Lincoln penny that is determined to be of Good grade is one that was circulated for most of its life. As a result, these pieces will show plenty of signs of that circulation. From the smoothing of the coin’s imagery to the complete wearing away of some of the lettering, there will be plenty of visible signs of damage. Despite this, these coins are still much more valuable than their one-cent face value.

When it comes to the value of the 1924 Lincoln penny, this is something that is determined not only by the grade, but also by its type. Being that there were 3 different types of Lincolns produced during 1924, there will be a few different values for 3 coins of the same grade. Below is a chart that will help you determine the value of a 1924 Lincoln given its type and grade.