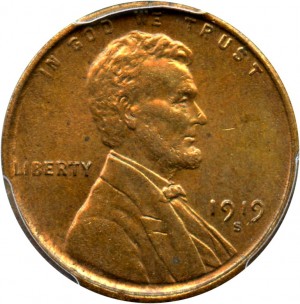 The Lincoln penny, for all intents and purposes, is still in circulation today. Having said that, the penny from 1919 looks just a little different from the modern variety. On top of that, the 1919 Lincoln penny is attractive to collectors due to a combination of the limited quantities still available and the historical significance of the coin. As such, collectors will pay a pretty penny to get their hands on these coins.

On the 1919 Lincoln penny’s obverse, you will notice the profile of former President Abraham Lincoln. His detailed image takes up most of the obverse, however the word “Liberty” is inscribed to his left while the 1919 year of minting is positioned to his right. Above Lincoln’s head on the outer edge of the coin is an inscription which reads “In God We Trust.”

The coin’s reverse is marked by two single stalks of wheat that are fixated towards the left and right hand sides of the coin. In between the two wheat stalks are inscriptions which read “United States of America” as well as “One Cent.” Finally, the Latin phrase “E Pluribus Unum” is arching overtop.

For collectors, the grade of a 1919 Lincoln penny means everything. Not only does the grade determine the type of condition the coin is in, it also helps a collector understand just how much a given coin is worth. Below will be a listing of the different coin grades in addition to what that grade will mean in terms of a 1919 penny.

Uncirculated: A coin that has received an Uncirculated grade is one that never spent any time on the open market. Having never been exchanged, these pennies were not subject to the wear and tear that normal coins are. As such, all of the coin’s features, down to the finest details, have been extremely well-preserved through the years.

Extremely Fine: If a coin is deserving of an Extremely Fine grade, this means that the coin in question will have spent most of its life in safekeeping. As such, the coin’s features will be mostly well-preserved. To the untrained eye, these coins may not appear to be all that different from Uncirculated coins, but under close inspection some small imperfections will be pointed out and taken into consideration.

Fine: A Fine grade is given to 1919 Lincoln pennies that spent a bit of time in circulation, but do not show extreme signs of damage. You will notice some smoothing along the penny’s outer edges as well as some chipping and/or scratching. Still, major features such as the date inscription and Lincoln’s image will have been mostly preserved.

Good: This is the grade given to coins that have definitely seen their better days. These coins will show plenty of signs of wear and tear. At times, the damage to these coins will be so extensive that some of the finer details might have been compromised entirely. Still, these coins are highly collectible.

As for the price you might be asked to pay for a 1919 Lincoln penny, this depends both on the type of coin as well as the condition, or grade. Because there were up to 3 different varieties of the penny created during any one year, you might have a different value for three coins of the same grade. Below is a chart that will help you understand what the value of a 1919 Lincoln penny might be given its grade and type.