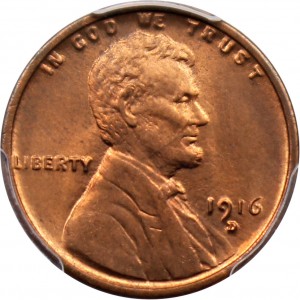 The Lincoln penny has changed over the years, but in its more than 100 year existence those changed have been quite subtle. The 1916 Lincoln penny is so desirable amongst collectors because it is a lot different from the penny in circulation today. What’s more, that desirability is increased once you know that there is only a limited quantity of these available, and that once they are gone they are gone for good. As such, collectors scramble to get their hands on these single-cent coins.

The design of the coin on the obverse side is a lot like the modern penny. The central part of the coin features the raised profile of Abraham Lincoln. To his left is a raised “Liberty” inscription, while the 1916 year of minting is to the President’s right. Arching overtop of the obverse side are the words “In God We Trust.”

The coin’s reverse features the phrase “United States of America” in the center. Joining that inscription is one that reads “One Cent,” the coin’s face value. Finally, you will notice the iconic American phrase “E Pluribus Unum,” which is Latin for “out of many, one.”

If you are a collector, the grade of a 1916 Lincoln penny means absolutely everything. After all, collectors only want the finest pieces they can afford in their collection, and grading helps you determine the precise condition the coin is in. Below we briefly explain what the different coin grades mean.

Uncirculated: If a coin is graded as being Uncirculated, this means that it has never spent any time in circulation. Having not gone through the day to day wear and tear that other pennies have, it will have been preserved in perfect condition. This means that every single aspect of the coin is now exactly how it was when it left the mint back in 1916.

Extremely Fine: If a coin is determined to be of Extremely Fine grade, this means that while it might have been circulated for a short period of time, it was largely kept in safekeeping. Under extremely close inspection you might be able to notice some scratches or other signs of wear, but to the naked eye these coins will appear to be mostly pristine.

Fine: A 1916 Lincoln penny deserving of a Fine grade is one that spent time in circulation, but has mostly survived the years without too much damage. These coins will show plenty of visible signs of wear, but they will have retained most of their raised, major features.

Good: Good is the grade given to coins that have seen their better days. Thanks to decades upon decades of wear and tear, these Lincoln pennies will have plenty of signs of significant wear and tear. In fact, some of the minor raised aspects of the coin very well might have been worn away completely. Especially those items closer to the coin’s outer edges.

When it comes to determining the price of a 1916 Lincoln penny, this is something that depends upon both the type and condition of the coin. Being that there were three different types of the penny produced most years, there will be 3 different prices for 3 coins of the same grade. Below is a chart that will help you make sense of how much these pennies are worth and what they might cost you on the retail market.