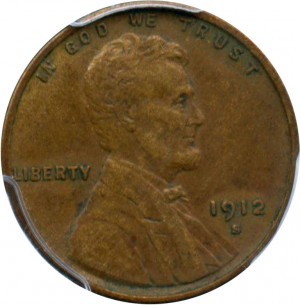 Though the 1912 Lincoln penny might look a lot like the modern single-cent coin in circulation in the United States, there are subtle differences that make it a bit more valuable than the penny underneath your couch. For one, the coin is more than 100 years old. Inherently, coins this old are of some interest to collectors. What’s more, the design of the coin is a bit different and no loner produced, this is also of some interesting to collectors.

As far as the design is concerned, you will find that the coin’s obverse is none too different from the modern penny. The center of the obverse is dominated by the profile of Abraham Lincoln. Above Lincoln’s head are the words “In God We Trust.” To either side of the former President’s image is a raised inscription which reads “Liberty” as well as the 1912 date of minting.

On the coin’s reverse, the central part of the face is filled with raised lettering, which reads “United States of America” and “One Cent.” To either side of the central lettering are two wheat stalks. Arching over the top of the reverse side is the Latin phrase “E Pluribus Unum.”

When it comes to collectors, the fact of the matter is that estimating the condition of a 1912 Lincoln penny is not good enough. Stringent and lax collectors alike prefer to have their coins graded. This is so because a coin’s grade is derived from an expert and is the official condition of the coin. As for the specific grades and what they mean, that much will be explained below.

Extremely Fine: The Extremely Fine grade is given to coins that have been circulated for a bit of time, but have incurred almost no damage whatsoever. Only under intense inspection will the slightest of scratches or wear be able to be made out. To the naked eye, these coins will look quite similar to coins of Uncirculated grade.

Fine: If a penny is given a Fine grade, this means that it has spent a good bit of time in circulation. These coins will show signs of wear and tear, and visible signs too. While some of the outer inscriptions will have been worn due to the exchanging of hands over the years, the major aspects of the coin will have been preserved.

Good: A coin that is determined to be in Good condition is one that has definitely seen its better days. There will be significant signs of scratching and smoothing, so much so that some of the raised aspects of the coin will have been completely compromised. There are varying degrees of the Good grade, but they are all describing a 1912 penny that has been significantly worn.

When it comes to the price of a graded 1912 Lincoln penny, this is something that depends on the type of penny you have. Many years saw as many as three different types of pennies made, so this is big factor. Below is a chart that will help you determine the value of a 1912 Lincoln penny based on its grade and type.