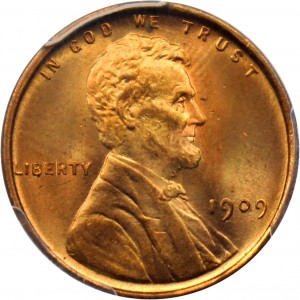 If you have any familiarity at all with US coins, you will notice that the 1909 Lincoln penny very closely resembles the single-cent coin still in circulation in the US today. While you wouldn’t be totally wrong, the 1909 version of the coin is much more sought after than the penny that is laying underneath your couch. Being that these coins are more than a century old, however, there aren’t a wealth of them remaining. Those coins that have survived the years are highly sought after by all types of collectors.

As for what the coin looks like, the obverse side is dominated by the raised profile of former President Abraham Lincoln. To the right and left of Lincoln respectively are the year inscriptions reading the 1909 year of minting and the word “Liberty.” Arching overtop of Lincoln’s head are the raised words “In God We Trust.” As for the reverse side of the 1909 Lincoln penny, the central part of the face is marked by the words “United States of America,” with the one-cent face value inscribed just above. On either side of these inscriptions are two ears of what, one on each side. The Latin phrase “E Pluribus Unum” arches over the top of the reverse side while the initials of the coin’s designer, Victor D Brenner, are featured at the very bottom.

Because these coins are from 1909 and a collector is only looking for those that have remained in solid condition, it is not too uncommon to have these types of coins graded. The process of grading is nothing more than having a professional look over the coin and officially assess its condition. An idea of what the different grades are and what they mean for the 1909 Lincoln penny can be found below.

Uncirculated: An Uncirculated Lincoln penny is one that, quite literally, never made its way out onto the open market. These coins will have been kept in safekeeping throughout almost the entirety of their existence, and will appear pristine even today. Though their color might have faded a little bit, the inscriptions and imagery on the coin will be as great today as it was the day it was minted.

Extremely Fine: An Extremely Fine grade is one that is given to a 1909 Lincoln penny that has survived the years in solid shape. Under close inspection there will be some imperfections noticed, but the coin, overall, will appear to have only been circulated for an extremely short period of time.

Fine: When looking at a Fine 1909 Lincoln penny, you might notice that things like Brenner’s initials or the “E Pluribus Unum” inscription will have been worn away a bit, if not completely. These coins will still appear to be in decent shape, however their age will show quite easily.

Good: A coin that receives a Good grade is one that has spent a long amount of time exchanging hands. Many of the raised aspects of the coin will have been compromised, however the major, central features will still be able to be deciphered.