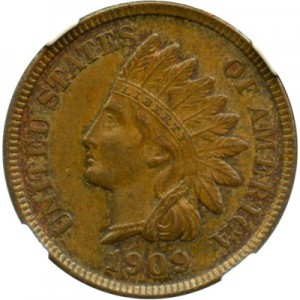 Generally, Indian Head Pennies from the 1900s are some of the most inexpensive simply because so many of them have survived to today. The one exception to that rule is the 1909 Indian Head as it was the last edition ever produced. As either the crucial starting or finishing point for any Indian Head collection, it makes sense that this year’s coin has its price inflated a bit regardless of condition.

While condition may not matter to the collector in question, the reality of the matter is that condition is everything for collectors. Finding this and any other Indian Head in great condition is the end-goal, yet is one that is not so easy to accomplish.

For coins as old as the 1909 Indian Head, the condition can be a very big wild card. While some of these coins have survived the years in great shape, plenty of others have gotten pretty well beat up along the way. For most stringent collectors, it is a necessity that you assess the condition of the coin before every making a purchase.

To officially assess the condition of a coin is known as grading, and this is something that is done by a professional company. Though you may not have time to send your coin away for grading, you can use the specifications below to gain a good idea of what a coin of a certain grade will look like.

Uncirculated: An Uncirculated Indian Head Penny from 1909 is one that saw no time exchanging hands on the open market. Instead, this coin was kept in a safe place where it would not be chipped, scratched, or otherwise damaged. As you probably expect, these coins will show no signs of wear other than the fading of the mint’s original luster; something that happens naturally as the coin ages and the copper oxidizes.

Extremely Fine: A 1909 Indian Head graded to be in Extremely Fine condition is one that saw only a very short period of time as part of the general circulation of Indian Heads. Because of this, you will find that Extremely Fine Indian Heads show very minimal signs of wear and have all their imagery and texture intact. All in all, these are some of the most attractive editions of the coin on the market today.

Fine: To receive this grade, the coin in question will have had to spend a decent amount of time in circulation. As a result of this circulation, the coin will show plenty of signs of wear and tear. The images on the front and the back of the coin will have been worn away to some extent, but should still be able to be made out with the naked eye.

Good: This is the grade given to those Indian Heads that spent countless years in circulation. These coins will be in pretty rough shape and will show plenty of scratching, chipping, and bending. Still, despite their condition, these coins will sell for an elevated price simply because they are the last of the Indian Head Pennies that were produced.

To give a 1909 Indian Head a price, you can look first and foremost at the condition the coin is in. Naturally, the better the coin has been preserved, the more you will pay for it. For the 1909s, however, you will find that the price has been inflated, even for those coins in poor condition, simply because of the year in which the coin was produced. The chart below will give you a good idea of what you can expect to pay for a 1909 Indian Head given the coin’s grade.