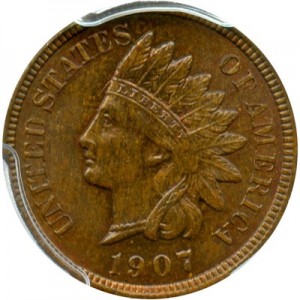 American coinage can be found in any number of denominations, in any type of condition, and from any time period since the late 18th century. Of all the coins produced throughout the United States’ existence, few series are more popular than the Indian Head Penny. Produced for exactly 50 years, these coins were a crucial part of the day-to-day lives of many US citizens.

Nowadays, collectors like to get their hands on Indian Head Pennies as a way of starting a collection. With more than 50 years of coins, collectors often start out with those from the early 1900s as they are the most plentiful and also the easiest to find.

For coins as old as this one, collectors are first and foremost concerned with the condition the coin is in. Having been circulated for many, many years, most of these coins show ample signs of wear. For collectors, this is not good, but it is encouraging to know that some have survived the years in great condition.

Judging the condition which a coin is in is known as grading. Usually, the process of grading a coin involves you sending it in the mail to a professional company, but by way of the chart below you can get a good idea what characteristics a coin of a certain grade will boast.

Extremely Fine: Still in near-pristine condition, Extremely Fine Indian Heads did not see much time exchanging hands. Apart from some extremely light scratching and chipping these coins will be nearly perfect. Of course, their luster will have faded completely as being circulated only works to accelerate the aging process.

Fine: A coin given a Fine grade is one that saw a good bit of time being exchanged. These coins will show some decent signs of wear and will have had some of the raised texture worn away. Still, these coins are fairly pleasing to the eye and have imagery that can be made out without too much eye strain. As far as blemishes on these coins are concerned, you can expect to see a good bit of scratching and chipping.

Good: Indian Heads in this condition are those that were circulated more than any other. These coins will show many, many signs of wear and tear and will be complete with scratching, chipping, and bending. Because of years being exchanged from person to person, these coins will also have had much of their texture worn down to the point where the coin’s faces are smoothed.

For collectors, how much they are willing to pay for one of these coins directly correlates with the condition the coin is in. In pristine condition, a 1907 Indian Head Penny will sell for much more than another coin in poor condition. Given the coin’s grade, you can use the chart below to gain a better idea of how much you will have to pay for a graded 1907 Indian Head Penny.