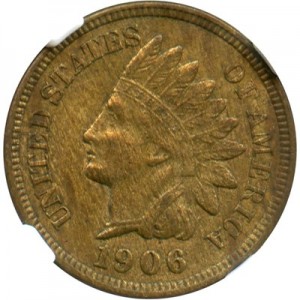 As far as US coins are concerned, few series are more sought after than the Indian Head Penny series. These coins not only spent a long time in circulation, they were circulated during periods that were very important in shaping the modern United States of America. Because of this, you can bet that collectors of all types are constantly trying to get their hands on well-preserved editions of the Indian Head Penny.

As part of the last decade of Indian Heads produced, the 1906 edition is typically one of the first collectors get their hands on. Of course, it all comes down to the condition of the coin as collectors only want those coins that in pristine shape.

Being that coins from 1906 are well over 100 years old, the condition they are in today can vary, and quite dramatically at times. For any collector, the first thing they will look at is the condition which the coin is in. The reason for this is due to the simple fact that no one wants to add a poorly preserved coin to their collection.

Officially judging the condition of a coin is known as giving the coin a grade. Typically, and more often than not, grading is performed by a professional company, but you can look at the condition of a coin and give it a grade without having to send it away. Of course, your grade will not be valid until it is looked at and confirmed by a professional service. The specifications below can help you understand the characteristics of Indian Heads that are graded.

Extremely Fine: An Extremely Fine Indian Head is one that saw only a very limited amount of time in circulation. These coins are in great condition and will show but only a few small signs of wear. Apart from light scratching or other small imperfections, these coins are aesthetically pleasing.

Fine: For coins that saw a good amount of time in circulation but did not get destroyed during the process, Fine is an appropriate grade. While the amount of scratching present on the coin’s faces will take away from the coin’s appearance, you will find that all the major facets of the coin are intact. For being so heavily used, these coins are in great shape overall.

Good: This is the grade given to coins that saw an extremely long time in circulation. Because of the years they spent changing hands, 1906 Indian Heads deserving of this grade will be scratched, chipped, and generally just beaten up. On some occasions, these coins will even be bent or chipped.

In order to give these coins a price, look no further than the grade the coin was given. Collectors will always look at the condition of the coin first, and if it is in especially good shape the investor in questions will have no qualms spending a good amount of money on the coin. By way of the chart below, you can gain a good idea of what graded 1906 Indian Heads will cost you on the open market.