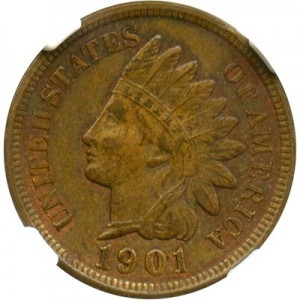 The 1901 Indian Head Penny is one of the final few editions of the Indian Head series. For collectors, it is important to get their hands on coins from this year as it will be necessary to complete any collection. Of course, even more important is getting your hands on one of these coins in excellent condition. Being that they are well over 100 years old, however, it is not so easy to attain a 1901 Indian Head in well-preserved shape.

As part of American minting history, the 1901 Indian Head draws attention from a lot of collectors. Because of this, these coins are becoming increasingly scarce with each passing year, so it is important to get your hands on them while you can.

For coins as old as the 1901 Indian Head Penny, collectors care most about the condition the coin is in. Because a pristine collection looks so much better than one made up of worn coins, it goes without saying that collectors are constantly trying to find these coins in superb condition.

When it comes to assessing the condition of a 1901 Indian Head Penny, the official process of doing so is known as grading the coin. Typically, the process of grading is performed by a professional company, but with the specifications below you can better understand what coins of a certain grade will look like.

Uncirculated: An Uncirculated Indian Head Penny is one that saw almost no time at all exchanging hands. Because of this fact, these coins will be well-preserved such that all of the imagery and texture remains intact. The only small flaw that can be found with 1901 Indian Head Pennies is that some of their original luster will have worn away with the years.

Extremely Fine: Extremely Fine Indian Head Pennies saw only a limited amount of time in circulation. These coins will appear in pristine condition, but upon closer inspection you will find that there is some scratching and other signs of wear present on the coin’s faces. Overall, however, there is very little aesthetically wrong with Extremely Fine 1901 Indian Heads.

Fine: A coin deserving of a Fine grade is one that saw a decent amount of time in circulation. These coins will show plenty of signs of wear and tear and will have had some of the texture worn away over the years. At the end of the day, the imagery present on these coins will be able to be relatively easily made out with the naked eye.

Good: 1901 Indian Heads in Good condition are those that have been worn quite considerably. Whether it be scratching, chipping, or the fact that the coin is bent, there will be plenty of signs of wear present on the coin. These are the worst of the worst as far as 1901 Indian Heads are concerned, but still are prized in the eyes of collectors.

For coins that are more than 100 years old like the 1901 Indian Head, you must first and foremost look at the condition of the coin. In great condition, collectors are willing to shell out a good bit of money for these coins. The grade of the coin in question will almost always determine how much you will pay. The chart below should give you a good idea of what you can expect to shell out for coin’s given their grade.