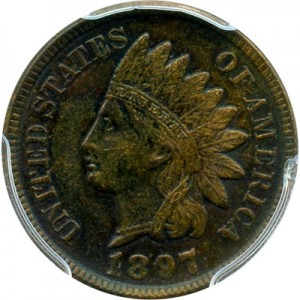 As far as United States coinage is concerned, few series are more popular amongst collectors than the Indian Head Penny. These coins played a crucial role in the exchange of money throughout much of the 19th century and into the 20th century. Because of this, a complete collection of Indian Head Pennies is the desire of so many collectors.

Because the 1897 Indian Head is one of the last editions produced, meaning it is one of the newest, quite a few have survived the years. For collectors though, the condition of the coin is everything and not all that many well-preserved 1897 Indian Heads have been able to survive the 100+ year journey.

Any coin as old as the 1897 Indian Head Penny is judged by collectors via the condition it is in. Because no one wants to add a beat-up, tattered coin to their collection, every person seeking out one of these coins is also seeking out one in great shape.

To officially judge the condition of a coin is known as grading. Grading is typically executed by a professional company, but by looking at the coin’s qualities you can give your piece a rough grade. By using the specifications below, you can derive a better comprehension of what conditions are indicative of certain grades.

Uncirculated: An Uncirculated Indian Head Penny is one that was never exchanged on the open market. These coins show no sign of wear and are in absolutely perfect condition. One flaw is the fact that some of the coin’s luster has worn away as the coin aged, but apart from that these coins are in pristine condition.

Extremely Fine: To receive an Extremely Fine grade, the coin will have been circulated, but only for a very short period of time. Apart from a few isolated scratches, these coins are also in pretty good shape for being well over a century old. The raised images and inscriptions are still able to be felt, and the imagery will be in near-perfect shape.

Fine: Fine coins were circulated for quite a few years, but there overall level of wear is not such that the coin is unattractive. All of the coin’s inscriptions and imagery will be able to be deciphered with the naked eye, but the coin’s texture will have been worn down a bit due to the exchanging of hands through the years.

Good: Coin’s receiving this grade have been quite heavily circulated and do not look that great at all. The imagery is still there, as are the inscriptions, but they are quite difficult to make out with the naked eye. What’s more, the faces of the coin will be devoid of texture as most of the raised aspects of the coin will have been worn down through being circulated during its lifetime.

Giving the Indian Head Penny a price is as easy as assessing the coin’s condition. Further, because the 1897 edition is a, relatively speaking, newer edition, many of them have survived. For this reason, even 1897 Indian Heads in pristine condition are quite affordable. Those coins in poor shape are incredibly affordable. The chart listed below will help you gain a better understanding of what you might be asked to pay for graded 1897 Indian Head Pennies.