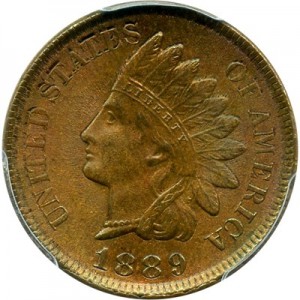 Generally speaking, Indian Head Pennies from the 1880s are scarce and not so easy to come by. The 1889 edition is a bit of an exception due to the fact that an unusually large quantity of the coins have survived to today. As part of any complete Indian Head collection, collectors will want to get their hands on this coin.

As part of the 3rd variety of Indian Heads, these pennies boast a 95% copper alloy. Because the coin is primarily made of copper, the mint’s original luster will have more often than not worn away through the years.

The specifications below will help you determine the grade of an 1889 Indian Head Penny by merely assessing its condition. Though official grades are derived by a professional grading service, the specs below can give you a rough idea of the condition of a coin of a certain grade.

Extremely Fine: An Extremely Fine Indian Head saw some time in circulation, but because its time exchanging hands was limited, so too is the damage and noticeable wear. The texture of the coin, that is the raised images and inscriptions, will still be maintained for the most part. The luster of these coins will have been mostly worn away and the coin’s faces will appear a bit duller.

Fine: A coin deserving of this grade saw a good amount of time being exchanged amongst US citizens. There will be heavy, visible signs of wear which may include chipping, scratching, or both. The texture of the coin will have been worn down a bit, but the imagery is still able to be deciphered with the naked eye.

Good: A Good Indian Head is, in truth, in pretty rough shape. The faces of the coin will be almost completely smooth and the images and inscriptions will not be so easy to make out. Heavy scratching and other signs of wear are typically found on coins of this grade as well.

As mentioned above, the 1889 Indian Head, regardless of condition, is not the priciest edition of the coin. Of course, it goes without saying that you will pay significantly more for a coin that is in superb condition. The chart below is aimed at giving you a more concise idea of what you might be asked to pay for an Indian Head Penny produced in 1889.