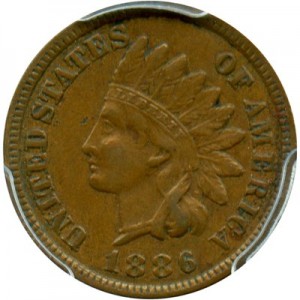 Compared to most other Indian Head Pennies from the 1880s, the 1886 edition is a bit more of a catch for collectors. The coin is not only scarce due to its being more than 100 years old, there are two different types, and it is the specific type that has a direct impact on the desirability of the coin. Unfortunately, as is the case with most Indian Heads, most of the 1886 coins will be found in condition that is quite awful.

If you can find one of these pennies in great condition, however, you can bet that they will sell for an extremely high price. Being part of American history, these coins are a prize to most every collector regardless of condition.

Though there are two different types of 1886 Indian Heads, the values are fairly equal. In order to determine the value of your coin, it is first necessary that you pay close attention to the overall condition of the coin itself. Coins this old have their condition officially assessed via a process called grading.

Grading is more often than not done by a professional company, but the specifications below can help you understand what a coin of a certain grade will look like.

Uncirculated: A coin graded as being Uncirculated is one that shows no signs of wear. These coins were not put into circulation and have maintained their texture, imagery, and most of their luster. As seen by how much money collectors are willing to shell out for these coins, it is clear to see that an Uncirculated 1886 Indian Head is by no means an easy find.

Extremely Fine: An Extremely Fine 1886 Indian Head was in circulation, but not for an extended period of time. These coins have shown almost no signs of wear and, apart from some scratching, the faces and imagery will be nearly pristine. The raised aspects too will be intact for the most part.

Fine: Fine 1886 Indian Head Pennies will show good amounts of wear and scratching. The coin’s luster will have faded away almost completely while most of the texture will have as well. Still, the imagery and inscriptions are still able to be made out with the naked eye without too much trouble.

Good: Good coins are the worst of the worst. Though they have survived the years, they are in particularly poor condition with most images fading and the texture worn completely away. Seen by the low asking price, these are the most commonly found types of 1886 Indian Heads.

When it comes to giving these coins a price, look no further than the condition/grade. The fact of the matter is that these coins can be found in decent condition, but it is extremely rare. Because of this, the price you will pay for an extremely well-preserved 1886 Indian Head Penny is far more than it would be for a coin of a lower grade. The chart below will help you determine a price for your 1886 Indian Head given the condition it is in and the type.