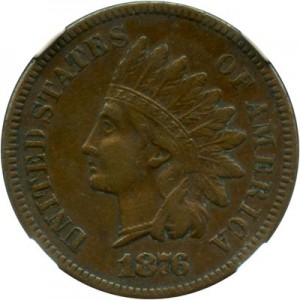 For a coin that was once worth no more than a single penny, it is hard to believe the type of prices people pay for coins like the 1876 Indian Head Penny. Very few of these coins have survived the more than hundred year journey to today, and as a result, collectors are willing to shell out a lot of money for them. Even in poor condition, these coins are a prize in the eyes of the collector. The historical significance of this particular coin is that it was made 100 years after the founding of the United States as a country.

When it comes to valuing a coin like this, the best way to do so is by first examining its grade. For those that may be unaware, a coin’s grade is nothing more than a sophisticated way of describing its condition. Usually, grading is done by professional companies who utilize the opinion of experts, but the specifications provided below can give you a good idea of what you can expect to see on the faces of an Indian Head from 1876 across different grades.

Uncirculated: An Uncirculated 1876 Indian Head Penny is one that has never been exchanged between hands. After being produced, this coin was immediately removed from circulation and preserved. The condition of this coin will be the best there is. The coin’s imagery and texture will be exactly like it was the day it was made. One downside is the fact that some of the coin’s luster will have faded with time.

Extremely Fine: For a coin to receive this grade, it must have spent almost no time at all in circulation. Though you can see signs of wear and the dulling of the coin, it is still in pristine condition. The coin’s raised imagery will still be there, as will all inscriptions.

Fine: A Fine Indian Head is one that spent a good amount of time in circulation. These coins are decently worn and show significant scratching and other imperfections. This coin is much duller than the previous two but still has imagery and inscriptions that can be read without too much trouble.

Good: These are the most commonly found graded Indian Heads. They will show extreme signs of wear after being exchanged for many, many decades. The texture of the coin will have been almost entirely eliminated such that the coin’s faces are smoother than anything else. Much of the imagery will also be difficult to make out.

Pricing this coin will be easy to do once you know its grade. Because condition is everything, it goes without saying that the coins in extremely good shape will sell for extremely large prices. In fact, the jump from an EF 1876 Indian Head to an F Indian Head is larger than you may think simply because of how difficult these coins are to find in decent shape. The chart below will help you understand what type of price you can expect to pay for coins of specific grades.