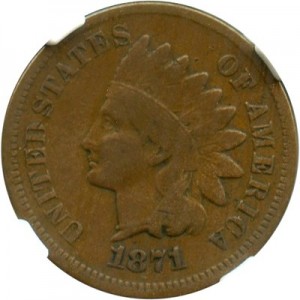 Of all the Indian Head Pennies that were minted, few editions are more valuable than those minted during the early 1870s. Though there is nothing inherently special about the 1871 Indian Head, it is a must-have for collectors simply because so few are able to be found nowadays. Because of heavy circulation through to the 20th century, many of these coins have simply disappeared over time.

Because of the scarce quantity of these coins remaining, they are inherently more valuable than other editions of the Indian Head Penny. Should your coin be in excellent condition, its value will be heavily inflated for no other reason than that there aren’t too many good quality coins for collectors to choose from.

For coins this old, determining their value is almost wholly dependent on the condition of the coin in question. The better the condition, the more valuable the coin will be; it is really as simple as that.

Uncirculated: An Uncirculated 1871 Indian Head Penny is one that never made its way to the open exchange market. These coins were almost immediately taken off the production line and put into safe-keeping. Because of this, the coin has retained most of its original shine and all of its raised imagery and inscriptions. Though difficult to get your hands on, these coins are quite beautiful and in pristine condition.

Extremely Fine: An Extremely Fine Indian Head is in mostly pristine condition, but has some signs of wear and tear due to circulation. Still, at the end of the day, the coin looks great and has retained most of its texture and imagery. Like Uncirculated 1871s, Extremely Fine coins are also inordinately difficult to find.

Fine: A Fine 1871 Indian Head Penny will show significant signs of circulation, including scratching and other blemishes. The texture of the coin still exists and can be felt, but has been worn down quite a bit over the years. All major images and inscriptions can also be made out, but they too are beginning to fade as a result of years of circulation.

Good: An 1871 in this condition will show significant wear and tear. The texture of the coin’s imagery and inscriptions will have been worn down to the point that they are somewhat difficult to decipher with the naked eye. Still, because of how difficult these coins are to find, collectors will still jump for a Good 1871 Indian Head Penny.

When it comes to determining the price of the 1871 Indian Head, or any Indian Head for that matter, the condition of the coin is everything.By using the chart below, you can accurately determine how much you can expect to pay for an Indian Head given its grade. The better the condition, the higher the price will be. For this particular coin, there are two versions, one that has a bold letter “n” in the “One Cent” inscription, and one that has a smaller, or shallow “n.”