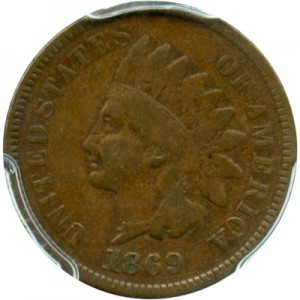 The 1869 Indian Head Penny has risen to the ranks of being one of the top ten most sought after editions of this coin simply because so few have survived the years. Even in poor condition, collectors want to get their hands on these coins in order to help complete their collections.

While even 1869 Indian Heads in poor condition sell quickly, those that are in exceptional condition sell even faster and for more money too. If the word “Liberty” on the Indian’s headband is able to be made out, you can bet that your coin will sell near the higher end of the price spectrum.

When it comes to determining the value of a coin that is as old as the 1869 Indian Head, it all comes back to condition. Conventional wisdom will tell you that the better condition your coin is in, the faster it will sell. For older coins, the exact condition which the coin is in is often referred to as the grade. Professionally grading services exist in order to accurately determine the grade of your coin, but by utilizing the specifications below, you can get a good idea of what grade your coin might receive should you submit it for official grading.

The different grades as well as their associated qualities are as follows:

Uncirculated: Uncirculated Indian Head Pennies are those that never made it to the open market. These coins were never used to pay for goods or debts and, as such, have all of their imagery intact and a shine that is almost as bright as it was the day it was produced. These are the most sought after types of 1869 Indian Heads, but also the most difficult to find and most expensive.

Fine: For a coin to receive this grade it is evident that it has been through years and years of circulation. Almost all of the shine has been worn away with the years, as has most of the coin’s texture. Still, major identifying facets, such as the Indian herself and the wreath on the opposite side, are able to be deciphered with the naked eye. Even in this condition, these coins are extremely difficult to find.

Good: Good 1869 Indian Heads are what you will find more often than any other graded coin from this year. Subject to decades of circulation, more or less all of the raised imagery on the coin’s faces has been worn down, as has the coin’s shine. Despite their poor condition, these coins remain a hot-ticket item for collectors looking to put together a complete Indian Head collection.

As is the case with most Indian Heads, the price you will pay will directly coincide with condition. With this edition, however, the price spikes a bit more for a coin in great condition. By way of the chart below, you can determine how much you can expect to pay for an Indian Head boasting a given grade.