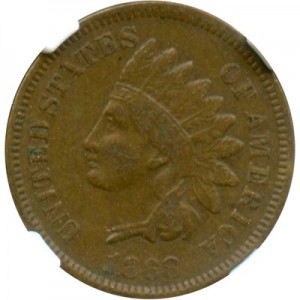 As part of the Indian Heads that were produced during the 1860s, the 1868 edition carries a bit of a higher premium than most other versions of this penny. Not only are these coins difficult to find because they are so old, they are difficult to find in pristine condition. Because of their heavy circulation, those 1868’s that you do find are often in poor condition.

If you can find a coin that is in great shape, the value of the coin you have most often doubles. Of course, finding a coin like that is not such an easy task.

Many problems with the coloration of the 1868 Indian Head have surfaced over the years. Because so many of this year’s coins encountered some sort of problem with the way in which the coin’s color has changed over the years, those coins that have remained of even tone and consistent color are of particular value.

By using the following specifications, you can help determine a rough grade for the coin(s) you own.

Uncirculated: An Uncirculated 1868 Indian Head is one that was preserved almost immediately after being minted. The coloration of the coin remains bright and consistent, similar to the day in which it was produced. These coins are extremely rare and therefore extremely valuable as well.

Extremely Fine: An Extremely Fine Indian Head is one that was circulated a bit, but was preserved after only a short time. This coin will also boast consistent, even coloration—even if the overall color has faded a bit with time. Once again, this type of 1868 is extremely difficult to get your hands on.

Fine: A Fine Indian Head is one that will begin to show signs of the problems encountered by many of this year’s coins. The color of the coin will likely be off in some way—typically this means that part of the coin has faded significantly more on one part of the coin than on another. In addition, you will be able to make out plenty of wear from years of circulation.

Good: A coin deserving of this grade will not only have problems with its coloration, but will also show signs of plenty of wear and tear. These coins were circulated heavily and it shows. These are the most commonly found 1868’s you will come across.

The pricing of your 1868 Indian Head will depend entirely upon its grade. Higher graded coins will sometimes sell for double and triple what their more circulated and worn counterparts will. Of course, it is extremely difficult to find a pristine 1868, so do not be surprised if all you find are those coins that received lower grades. The chart below will help you determine how much a coin will go for given a specific grade.