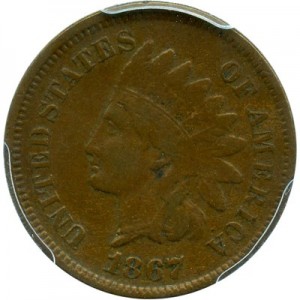 The 1867 Indian Head Penny is a must-have for collectors and is one of the rarer editions of the coin around. Because these coins were produced such a long time ago, so many of them were lost with the years. Even more still have fallen victim to heavy use due to circulation and see their faces faded and worn.

Though finding this coin is quite difficult for many, finding it in superb condition is even more difficult. The grade of this coin is everything, and the better-preserved the coin is, the better grade it will receive and higher it will sell for.

When it comes to determining a coin’s grade, it all comes down to condition. The coins that have been adequately preserved over the years receive the best grades, while those that have been heavily circulated are graded towards the lower end of the spectrum. In the case of the 1867 Indian Head, it is difficult to find a version that is in great shape, meaning that it will inherently carry a larger price tag.

By using the specifications below, you can give yourself a rough idea of what the coins you own would be graded as.

Uncirculated: If your coin has been uncirculated, this means that it was taken off of the production line and kept in a safe place. These coins have all of the finer details preserved and look as though they were produced only a few years ago, not more than a century. As you might have guessed, Uncirculated 1867 Indian Heads are quite difficult to find.

Extremely Fine: A coin worthy of an Extremely Fine grade will show some very minor signs of circulation, but will still be in what can best be described as pristine condition. Though some of the coin’s coloration will have faded, the imagery, inscriptions, and other small details are able to discerned with no trouble at all.

Fine: A Fine Indian Head will show plenty of signs of circulation and will likely play host to some scratching too. Still, the coin itself is in decent shape and most of its imagery and inscriptions can be seen without the use of a magnifying glass. The coin’s coloration will show significant fading.

Good: A coin receiving this grade will show extensive wear and scratching. Because it likely exchanged hands thousands, if not millions, of times, the coin is faded, smoothed, and generally beat up. Still, it is a rare find and is nothing to scoff at.

As is the case with any coin this old, the price you will pay all depends on the coin’s condition. Those coins that are graded to be Uncirculated and Extremely Fine will sell for a lot of money, while those in rougher shape will be able to be purchased for a bit of a bargain. The chart below will give you a rough idea of what you can expect to pay for Indian Heads of different grades.