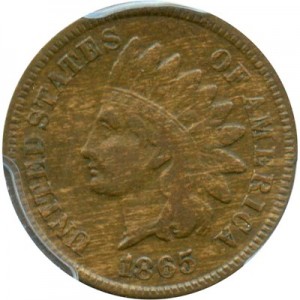 The 1865 Indian Head Penny is part of the post-Civil War production years and is not as intriguing to investors as some of the more unique coins emerging from before and during the Civil War. Still, these coins were the first to be produced with a 95% copper alloy—the same alloy that was used by the US Mint for many years to come.

During the time in which this coin was minted, many millions emerged from the various mints across the US. Now, however, only a small percentage of that original lot remains, and collectors are constantly trying to get their hands on them. Even rarer still are versions of the 1865 Indian Head that are in pristine condition.

When it comes to grading this particular Indian Head, or any coin for that matter, the condition of the coin is what you are paying most attention to. Because these coins were minted so long ago, it is not at all uncommon to find examples that are heavily worn and quite clearly show their age. By knowing your specific coin’s grade, you will be able to then proceed to determining how much it is worth. By using the specifications below, you can garner an idea of what your coins are going for on the open market today.

Uncirculated: As its name implies, this coin was never put into circulation and was essentially put into a safe place immediately after being minted. Very few of these coins exist and they are, by far, the most valuable 1865 Indian Heads. The imagery, coloration, and texture of these coins has not faded at all and the coin appears to have just been minted (or, not minted 150+ years ago).

Extremely Fine: Extremely Fine Indian Heads resemble Uncirculated varieties, though due to light circulation, some imperfections are noticeable. All in all, however, these coins are extremely attractive and complete with all of their finer details.

Fine: to receive this grade, your coin will show plenty of signs of wear due to circulation. The color of the coin will have faded quite a bit and the overall feel of it will be best described as dull. Still, all major details are able to be discerned without too much strain on the naked eye.

Good: This grade is given to the most heavily worn and circulated coins. Plenty of scratching will appear on both faces of the coin, and even the imagery will begin to be a bit difficult to make out. Though rare, these are the most commonly found types of 1865 Indian Heads found simply because they were used by people so frequently.

When it comes to pricing your 1865 Indian Head, it all comes down to condition/grade. As is typically the case with these coins, the best-preserved carry the largest price tags while those that have exchanged hands hundreds of thousands of times are not quite as pricy. The chart below will give you a rough idea of how much these coins cost as it relates to their grade.