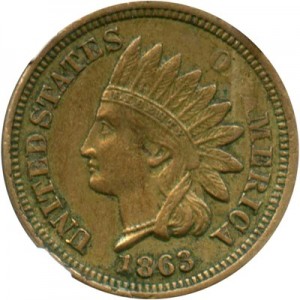 As part of Civil War-era coins, the 1863 Indian Head Penny is especially sought after by collectors. These coins are sought after further because they are made with a special copper-nickel alloy that was only used during the Civil War. This special alloy makes Civil War-era Indian Heads heavier than other editions.

These coins are more than 150 years old, but they are readily available on the open market. What is difficult to find, however, is an Indian Head that is in great condition. Because condition is everything when it comes to coins this old, collectors are always looking for 1863 Indian Head Pennies in pristine condition.

When it comes to determining the value of your Indian Head Penny, you must first take into consideration the condition of the coin. Though much more than that goes into determining the coin’s grade, it essentially comes down to condition. After all, being that these coins are more than 150 years old, it is extremely difficult to find one that is in great condition.

By taking note of the different grades listed below, you can give your coin(s) a rough, unofficial grade.

Uncirculated: An Uncirculated 1863 Indian Head Penny looks like it was just taken off the production line yesterday. Though the years have caused some of the tone and coloration of the coin to fade, it remains in great condition. All of the coin’s imagery and inscriptions are able to be felt and easily discerned.

Extremely Fine: An Extremely Fine Indian Head Penny is almost as pristine as an Uncirculated coin, only it shows some signs of wear. Whether it be the absence of luster and shine, or the presence of some scratching, there are small factors that compromise the coin’s perfect condition.

Fine: To receive a Fine grade, your Indian Head Penny must not show too much wear. Though you are definitely able to see some smoothing of the coin’s imagery and wearing away of the coin’s color, the big details such as the Indian’s face, wreath’s leaves, and inscriptions are all able to be made out with the naked eye.

Good: This grade is given to coins that show very visible signs of wear and tear. Much of the imagery has been smoothed thanks to years of circulation and the inscriptions on the coin are becoming increasingly difficult to make out. This is the grade most commonly associated with Indian Heads simply because most of them were used and circulated quite heavily.

To determine an accurate value for your 1863 Indian Head, you must first determine your coin’s grade. With coins that are this aged, it is the grade that is the most accurate determinant of price. Though an official grade can only be acquired by way of professional grading services, the specifications above and chart below can help you gain a rough idea of how much a specific Indian Head can be sold/bought for.