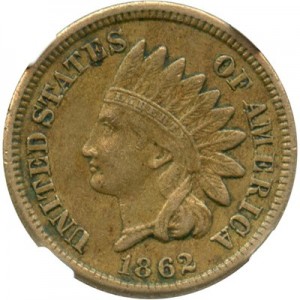 The Indian Head Penny is one of the most prestigious types of coins ever produced by the US Mint. Though originally produced in 1859, the coin’s design was changed after only one year. The 1862 Indian Head is the third year the new design was used and is sought after by collectors of all types.

Because these coins are well over 150 years old, it is extremely difficult to find them in decent condition. These coins were used to pay bills, pay for food, and as a result were circulated heavily. This wear is seen on many of the coins in this series which is why it is extremely difficult to get your hands on one that is in great condition. Still, plenty of pristine 1862 Indian Head Pennies exist and are available for purchase.

Being that 1862 was the second year of the Civil War, this coin is sought after by collectors who are attempting to collect Civil War-era coins. These coins are made with a copper-nickel alloy that makes them a bit heavier than Indian Heads produced either before or after the War.

The grade of a coin is nothing more than an expert’s way of determining the condition of the coin in question. Knowing this condition, you can accurately determine how much the coin in question is worth or can be sold for. Of course, only an expert can determine the exact grade, but by using the specifications below you can give your coin a rough grade.

Uncirculated: An uncirculated 1862 Indian Head Penny looks almost identical to the way it did when it was produced more than 150 years ago. Apart from some changes to the coloration and tone of the coin due to age, the coin’s imagery and inscriptions are all easily discernible to the naked eye. Things like the Indian’s cheekbone and the leaves on the reverse side’s wreath can be seen without much trouble at all.

Fine: A Fine coin was not circulated for an extremely long period of time, but was circulated. You can see clear signs of wear and tear, especially on the coin’s images and inscriptions. Scratching is also a fairly common sign of a Fine grade.

Good: A Good graded 1862 Indian Head Penny is in fairly rough shape and was circulated for quite some time. The raised inscriptions and imagery have been smoothed out through years of circulation. In all, many of the detailed aspects of the coins faces have faded with the years.

The pricing of Indian Head Pennies is determined first and foremost by the condition and grade of the coin. Because most of these coins have signs of wear and tear, collectors are trying to get their hands on those that are in the best condition. As you might expect, the Indian Heads that are in the best condition will also go for the highest prices. By using the chart below you can get a rough idea of how much a coin with a specific grade will cost you.