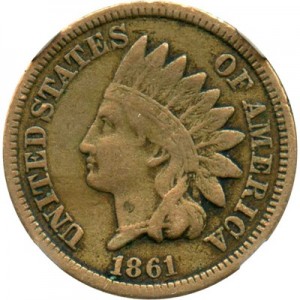 As far as determining a value for the 1861 Indian Head is concerned, you must first determine the coin’s grade. By using the specifications provided below, you can give your Indian Head a rough grade. Of course, an official grade can only be given by having your coin(s) certified by a professional grading service.

Determining the grade of 1861 Indian Head Pennies is imperative in order to determine how much that specific coin can be bought or sold for. Though the process of grading a coin involves a number of different factors, it basically boils down to how well your coin has managed to be preserved over the years. Being that these coins were first produced more than 100 years ago, most are in pretty rough shape, but there are a number of these pennies that are still in near perfect condition.

By using the specifications and chart below, you can attain a rough determination of value for the coin(s) in your collection.

Uncirculated: An uncirculated 1861 Indian Head Penny looks almost identical to what it did the day it was minted. Though the years have caused an alteration in how the coin’s color and tone appears, the details on the imagery are able to be easily discerned with the naked eye. This means that things like the ruffles on the Indian’s Headdress’ feathers, individual leaves on the reverse side’s wreath, and all inscriptions are able to be seen and read without much trouble.

Extremely Fine: An Extremely Fine 1861 Indian Head Penny is in great condition, but shows minor signs of wear. Still, apart from some spotting and signs of circulation, these coins are in absolutely pristine condition. All of the imagery and inscriptions should be able to be easily seen.

Fine: To receive a Fine grade, your coin(s) must still be in decent shape without too much sign of wear and tear. Though all the imagery is able to be discerned, it is clear to see that it is fading and beginning to merge together. Things like the boundary between the headdress and the Indian’s forehead are beginning to disappear.

Good: Without closely inspecting it, a Good graded coin shows visible signs of wear and tear. Boundaries between images are beginning to merge together such that the headdress is not able to be easily discerned from the Indian’s forehead. Additionally, the coin’s faces are a bit smoother; indicative of the imagery and inscriptions being worn down from years of circulation.

The 1861 Indian Head Penny is especially important because it was made with a unique alloy. Because of this, its price has been driven upward a bit more significantly than other editions. As is the case with any Indian Head, the condition of the coin is the number one determinant of value. The chart below offers up a bit of insight as to what you might be asked to pay for an 1861 Indian Head Penny given its condition.