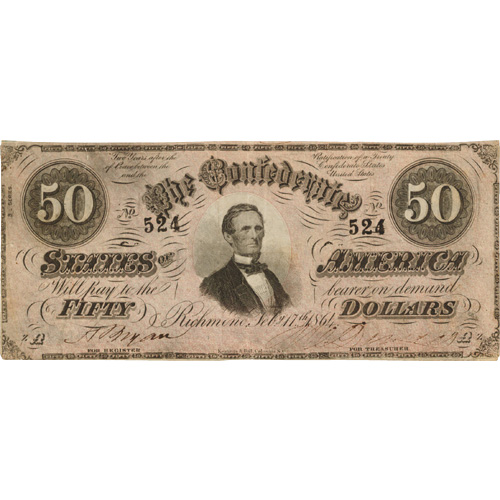 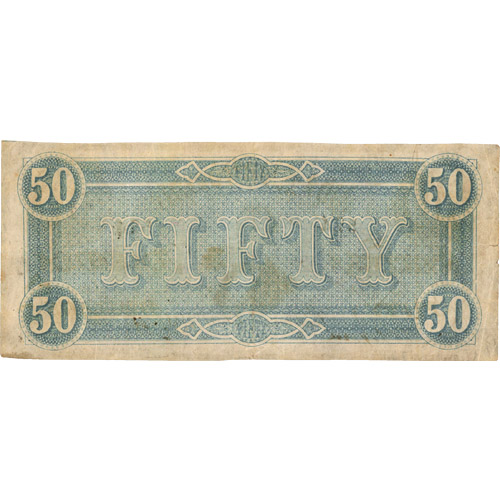 In all, the Confederate States dollars were issued through seven series representing a number of different acts passed by the Confederate government. From the beginning in March 1861 until February 1864, $50 denominations were issued. From the third series released in December 1861, Confederate President Jefferson Davis appeared on the obverse of the notes.

On the obverse of 1864 $50 Confederate States of America Notes is a portrait of President Jefferson Davis. The effigy of President Davis appears the same on these 7th Series 1864 $50 Notes as it did on the first ones issued in late 1861. These particular notes were issued by Keatinge & Ball in Richmond, Virginia, on February 17th, 1864.

The reverse face of 1864 $50 Confederate States of America Notes comes with a simple design element. The vignette comes with seven indications of the face value of the notes in Confederate States dollars. The Arabic numerals are featured in each of the four corners, with a large text denomination across the central field and twice above it.

These 1864 $50 Confederate States of America Notes come with plastic currency sleeves. Notes in Very Fine condition show light to moderate signs of circulation use and light to mild soiling. Fold lines will be present on these bills, with the highest-quality Very Fine notes bearing no more than 10 fold lines, but the average note showcasing numerous folds.