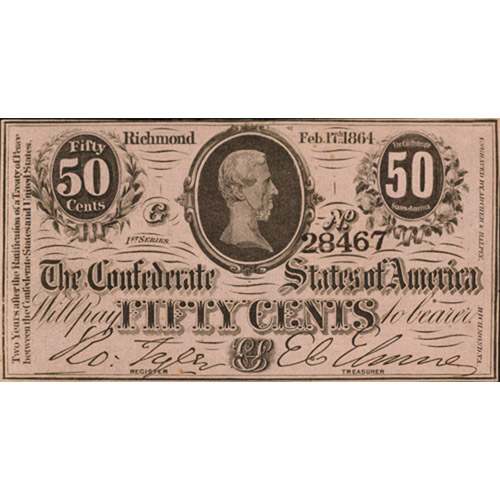 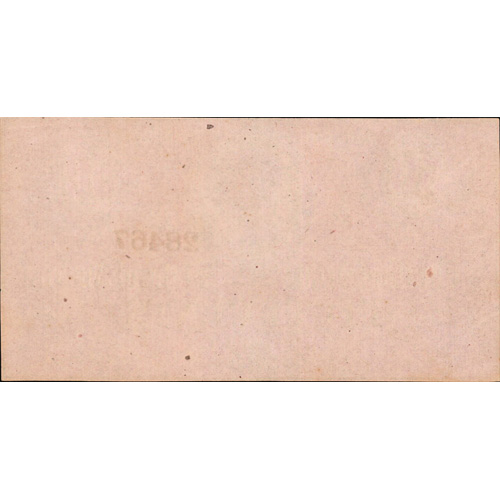 One of the more unique forms of American paper currency from history comes from the Confederate State of America. Issued by the CSA from 1861 to 1865, the notes were rendered monetarily useless after the war as the Union refused to recognize the debts of the Confederacy. However, these notes do maintain collectible value among monetary enthusiasts. Today, 1864 50 Cents Confederate Currency Notes are available to you online from JM Bullion in uncirculated condition.

All of these 1864 50 Cents Confederate Currency Notes are available with a protective currency sleeve. The bills offered in this particular listing are in uncirculated condition. Notes in this condition may have minor issues with the centering of the designs and margin elements that skew into the design field of the note. Additionally, uncirculated notes have minor signs of circulation use, but feature no fold lines.

Confederate States dollar banknotes were entirely unique when compared to the Demand Notes and United States Notes issued by the Union. While the federal government had the Bureau of Engraving & Printing at its disposal for centralized production of currency notes, the Confederacy turned to all manner of small businesses and banks to produce notes. Among the primary features of Confederate notes, you’ll find that the notes were cut by hand, signed by hand by a Treasurer, and hand-stamped with serial numbers.

On the obverse of the 1864 50 Cents Confederate Currency Notes is a right-profile portrait of President Jefferson Davis. He famously featured on a number of different denominations of Confederate notes. You’ll find the name of the Archer & Halpin, a lithographic firm in Richmond, Virginia, that produced Confederate notes throughout the war.

The reverse side of 1864 50 Cents Confederate Currency Notes comes with a blank field. The only feature you may notice on this side is the ink from the serial number that has bled through slightly.

Please feel free to reach out to JM Bullion if you have any questions. Our customer service team is available to assist you at 800-276-6508, online through our live chat, and using our email address.