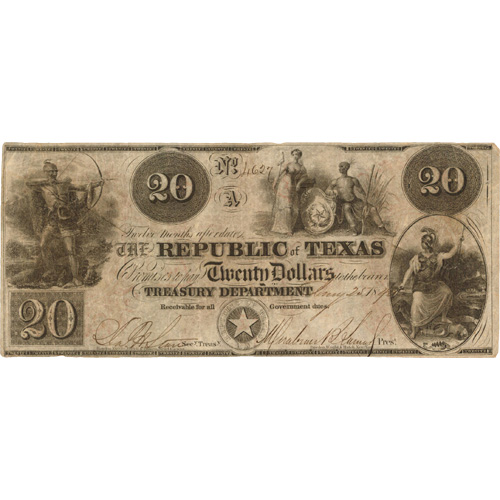 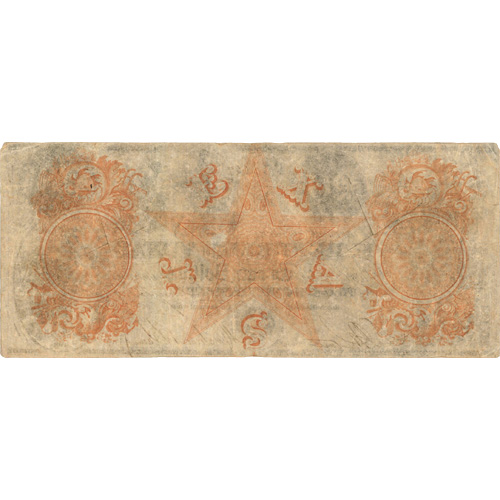 When the Republic of Texas gained its independence from Mexico, monetary policy within the new sovereign state allowed for a variety of different forms of circulating currency. American gold and silver coins were widely circulated at first and accepted for all commercial transactions in the Republic of Texas.

In addition, businesses would accept banknotes issued by private banks. However, the Panic of 1837 that gripped North America led to the lower circulation of American gold and silver coins. With no sources of silver and gold of its own, the Republic turned to the issuance of banknotes. The most notable among these was the so-called redback.

For the obverse design of 1839-1841 $20 Republic of Texas Notes, the Treasury Department of the Republic of Texas issued an ornate design with several different vignettes. On the left side of the note, you’ll notice an indigenous figure drawing an arrow back in his bow. The lower-right design field includes a depiction of a female goddess of war, likely Athena or Minerva from Greek and Roman mythologies. Along the top of the design, a woman stands near a seated indigenous figure with a shield bearing the Lone Star of the Republic on its face.

These 1839-1841 $20 Republic of Texas Notes are offered with a protective currency sleeve. Notes in Fine+ condition show rounded corners, margin splits, and various fold lines throughout the field of the paper. Please note you could receive bills with various or matching dates between 1839 and 1841, as well as notes with the exact same wear patterns and flaws.

JM Bullion customer service is available to assist you at 800-276-6508. We are also available to you online via our live chat and email address features.