JM Bullion regularly offers our customers the chance to purchase unique coins sets. Chief among those are the Four Seasons American Silver Eagle and Canadian Silver Maple Leaf Sets. In the past, these coins have directly adhered to the concept of “four seasons” with different colorization on each of the four coins in the set that reflect the changing seasons. With the release of the 2020 Four Seasons Sets, the colorization went a different direction by bringing climate change into focus on one side of the coins. Read on to learn more about the 2020 Save the World Edition Four Seasons Coins before buying silver at JM Bullion. 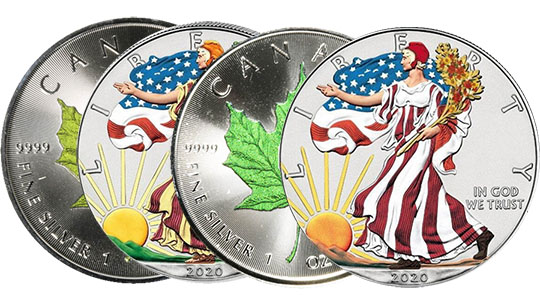 The Save the World Edition Four Seasons coin sets swap out the traditional reverse design on the American Silver Eagle and obverse design on the Canadian Silver Maple Leaf in favor of a shared, colorized design. Each of the four coins has a unique image representing a different climate from around the world. These regions are depicted in two contrasting visuals in the photographic, colorized designs. Included in the set are the following biomes:

The 2020 American Silver Eagle Save the World Edition Four Seasons Coin Set features the aforementioned reverse design elements paired with the obverse design of Walking Liberty. Created in 1916 by Adolph A. Weinman, this design continues to be regarded as one of the greatest in American coining history. The Four Seasons flair of this release is evident in the different colorizations added to Liberty in this release. The four coins each showcase a different season of the year with new colorization on Liberty and her surrounding elements. These include:

Just as the American Silver Eagle Set uses colorization on its obverse, the 2020 Canadian Silver Maple Leaf Save the World Edition Four Seasons Coin Set comes with colorized reverse designs. The sugar maple leaf on the reverse of each of these coins has a singular colorization that showcases a different season on the calendar, with the following designs:

All 2020 Save the World Four Seasons Coin Sets are available with wooden display boxes that include a Certificate of Authenticity. The coins are all Brilliant Uncirculated specimens from the respective mints that have been enhanced with the colorization by a separate, third-party dealer to create a collectible set. There is an issue limit of only 2,000 sets per release.

Collect Save the World Four Seasons Sets through JM Bullion

JM Bullion customer service is available to you on the phone at 800-276-6508 to answer questions. You can also chat with us live online or simply send us an email with your inquiries. Keep in touch with JM Bullion each week by following us on Facebook and reading our weekly blog posts for in-depth looks at new products.