In recent years, countless Marvel and DC Comics have made their way from graphic novels collected by young men and women to the big screen as major blockbusters generating millions in ticket sales, and billions in overall revenue. Those same films have infiltrated precious metals, with mints around the globe capitalizing on the popularity by releasing silver and gold collectible coin series. Steven Spielberg is one of film directing’s greatest names, but he’s been absent from this trend of comics-to-films-to-precious metals.

However, the recent release of the 2011 science-fiction novel Ready Player One as an adaptation on the big screen of the same name is brining Spielberg back into focus, and giving fans of the genre who happen to live silver a chance to get in on the action. From the Perth Mint, a new series of silver coins for sale highlight the characters in the already-popular Ready Player One feature film release. Learn about the first two coins available in the series today in the JM Bullion blog. 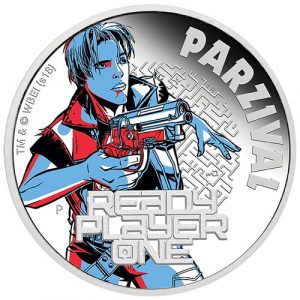 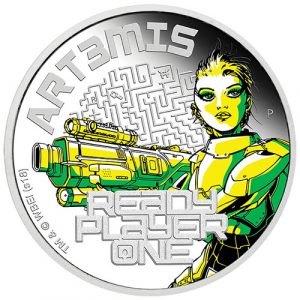 The first two coins issued in the Perth Mint’s Ready Player One Series focus on Watts, and another of the story’s main protagonists, Samantha Evelyn Cook. In the first issue of the series, the 2018 1 oz Tuvalu Ready Player One Parzival Silver Coin arrives. The Parzival coin features a reverse design with the avatar named Parzival, which is the avatar used by Watts when he competes to find the egg inside of OASIS. The colorized reverse design captures Parzival in shades of blue and red holding the gun he uses to defend himself against other gunters in OASIS.

In the second release, the 2018 1 oz Tuvalu Ready Player One Art3mis Silver Coin is available with the avatar used by Cook. This avatar is a female figure with hues of green and yellow, and she wields a much more impressive gun. Both coins have reverse engravings of the film/novel name “Ready Player One,” as well as the representative avatar. There is a background design on the reverse of both coins that resembles a maze, indicative of their hunt for the egg, and the Perth Mint’s “P” mint mark also appears.

On the obverse of both coins in the Ready Player One Series is the effigy of Queen Elizabeth II. As is typical with Australian coins at this moment, Ian Rank-Broadley’s fourth-generation depiction of Her Majesty is featured in right-profile relief. The Queen’s effigy is accompanied by engravings of “Queen Elizabeth II,” “Tuvalu,” “1 Dollar,” “2018,” and the coin’s weight, purity, and metal content.

The Story Behind the Film

Though Spielberg is known for directing some great films that came from the minds of producers, or even his own, the inspiration for this film and the coin series came from an American novelist. Ernest Cline wrote the science-fiction novel of the same name, Ready Player One, and published it in 2011.

The story in the book is set in the year 2044 in a dystopian future society. In a story no doubt written as a potential warning on mankind’s current course, the world faces an energy crisis stemming from the depletion of fossil fuels and a day of reckoning with global warming’s consequences. In this dystopian world, overpopulation has led to widespread social problems and economic stagnation. With humanity crumbling around them, mankind has taken to forgetting its woes in a virtual world created by billionaire James Halliday.

OASIS is a virtual reality world that Halliday invented as an escape for the reality of life in 2044. The story follows Wade Watts, the main protagonist in the book who lives with his aunt in an Oklahoma City trailer park. Only this trailer park is unlike the kind you see today, with countless homes stacked on top of each other. Upon the death of Halliday, his fortune is up for grabs to any player who can find an “Easter egg” inside of OASIS. To the winner goes Halliday’s fortune and control of OASIS. Players in the story take control of their avatars in OASIS and combat other gunters (egg hunters) in hopes of turning around their own fortunes.

Details on the Ready Player One Releases

Each of the silver coins for sale in the Ready Player One Series from the Perth Mint arrives in a special packaging. The coins are packaged inside of clear, acrylic cases that allow you to display the coin with both the reverse and obverse side visible at the same time. Further, the cases are packaged inside of Ready Player One-themed shipping boxes and include a numbered Certificate of Authenticity from the Perth Mint.

The coins in this series have a limited mintage of 5,000 coins per issue, and each one contains 1 Troy oz of .9999 pure silver. The coins have a beautiful proof finish with colorized design on the avatar characters featured on the reverse.

Reception of Ready Player One

The new Ready Player One Series of silver coins from Perth Mint were perfectly timed for release to capitalize on the release of Spielberg’s film. The film adaptation of the popular novel hit theaters back on March 29, 2018 just ahead of the long Easter Weekend in the United States. For the four-day holiday weekend, the film topped the box office with $53 million in ticket sales across 4,324 theaters around the country. The film was also quickly released in China, where ticket sales have pushed its international box office performance over $181 million over the same four-day weekend. As of Tuesday this week, the film had grossed roughly $228 million.

Cline’s novel achieved its own impressive success upon its publishing. The novel was published August 16, 2011 and was released as an audio book the same day with narration by science-fiction fan and actor Wil Wheaton, whose name is mentioned briefly in one of Cline’s chapters in the book. The book earned an Alex Award from the Young Adult Library Services Association, and the 2012 Prometheus Award. To date, it has been translated into more than 20 languages for publishing around the globe.

Stick with JM Bullion for the Latest News!

As always, it is our goal to keep you in the know. Our blog posts help highlight new products, upcoming releases, and fun/exciting/weird news from the world of precious metals. Remember to follow us on Facebook for all the latest commentary on new coins, pictures, contests, and of course, updates when new blog posts go live.