Introduced in 2019 with a depiction of a giraffe running across the savanna in Africa. For the second design in the new series, the collection moves to the sea with a depiction of the largest living mammal in the world. As with the previous release of the collection, the newest Congo silver coin comes with a gilded version and a brilliantly colorized silver coin. Details on the design and release of the new 2020 Congo Whale Silver Coins are available below. 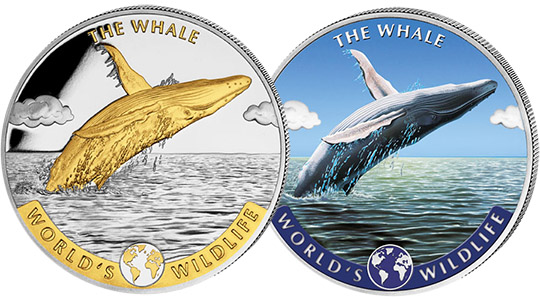 On the reverse field of 2020 Congo Whale Silver Coins, you will find a depiction of Earth’s largest animal lunging up from the waters of the ocean to turn on its back and splashback down with impressive effect. The ocean is calm as the blue whale breaks the surface of the water. Other design elements on this side include puffy clouds in the sky in the background and a depiction of the planet in a small circle at the center of the lower design rim. The name of the coin design and the series both feature in inscriptions on this side.

The obverse face of the 2020 Whale Silver Coins comes with a vision of the modern coat of arms for the Democratic Republic of Congo. The national seal features a leopard’s head in front-facing relief at the center with an elephant tusk flanking it on the left and a spear flanking it on the right. There is a pedestal below the leopard head that has a framing element that offers the inscription of the national motto “Justice, Paix, Travail” on its surface. The face value, weight, metal content, purity, and date mark all feature on this side as well, and there is a beaded border design element.

While the World’s Wildlife Series of silver coins from the Democratic Republic of Congo comes with a Brilliant Uncirculated option, the collectible options are very popular. The 2020 Colorized Congo Whale Silver Coin comes with a brilliantly colorized reverse field. The colors bring a bright blue to the daytime sky and clear white to the puffy clouds. The bluish-gray skin of the whale is captured perfectly. In the 2020 Congo Whale Silver Gilded Coin, the design elements remain the same, but there is a selective application of 24-karat gold in thin layers on specific design elements. The body of the whale is covered with 24-karat gold, but in a brilliant twist, the splashes of water still clinging to its frame remain in the original silver for an impressive contrast. The planets on Earth are finished in gold in the small circle at the bottom, as is the inscription below it of “World’s Wildlife.”

Each of the coins in the World’s Wildlife Series of 1 oz silver coins features .9999 pure silver content. The coins have a face value of 20 Francs and each of the options covered in this blog post comes with an individual plastic capsule. As the second release of the series, these coins are each limited in mintage to 5,000 silver coins.

The blue whale comes from the baleen whale suborder and is by far the largest animal in the world. The maximum recorded length of a blue whale is 98 feet and the species can weigh up to 190 tons. Five subspecies of the blue whale are currently known to exist, with those subspecies living in the North Atlantic and North Pacific, the southern oceans, the Indian Ocean and South Pacific Ocean, the Northern Indian Ocean, and another subspecies that has not been formally named living off the waters of Chile.

An endangered species, the blue whale once abundantly populated all of the oceans on Earth. Even as recently as the late 19th century, the blue whale could be found swimming in all corners of the globe. In the century spanning 1868 to 1978, it is estimated that more than 382,500 blue whales were hunted and killed in the world’s oceans. Today, the most populous groupings of blue whales can be found in the Antarctic and the Eastern North Pacific Ocean.

If you have any questions about the World’s Wildlife Series silver coins, JM Bullion customer service is here to help. Our team is available at 800-276-6508, online through our live chat, and via our email address. You can follow us on Facebook for daily and weekly spot price contests and read our weekly blog posts for in-depth details on new and upcoming releases.