Thanks to modern technology, shipwrecks are largely a thing of the past. Modern vessels have stronger hulls than their predecessors and as mankind gains greater knowledge of the dangers lurking on the high seas and just below the waves, sailors are better equipped to avoid potential dangers. This hasn’t always been the case though. The Shipwreck Series from the Royal Australian Mint shines a light on the tumultuous past of the island continent’s coastline. With more than 8,000 known shipwrecks off its shores, it’s impressive that RAM could focus on just four ships! The second release in the Shipwreck Series is the Vergulde Draeck and it is available for pre-sale right now from JM Bullion. 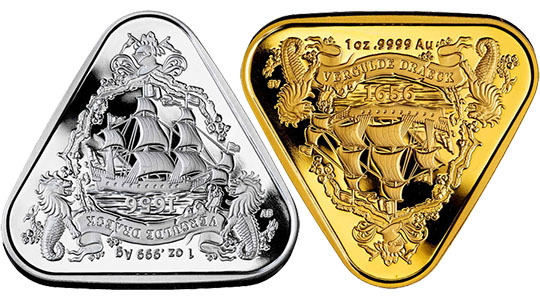 2nd Design – Chaos at Night Aboard the Vergulde Draeck

Each of the triangular bullion coins in the new Vergulde Draeck release has its own distinctive reverse and obverse designs. As with the debut release of the Batavia, the reverse of the coin captures the ship in its full, proper glory as a sailing vessel while the obverse depicts its terrifying final moments as it meets with its watery fate. The obverse side of the 2020 1 oz Australian Shipwreck Vergulde Draeck Silver Coin includes the sixth-generation effigy of Queen Elizabeth II in right-profile relief in the top corner of the triangular design. Below this bust of the Queen, the chaos of the Vergulde Draeck’s nighttime sinking plays out. As the Vergulde Draeck sinks in the distance, a lifeboat and a handful of survivors battle the waves to get safely to shore as wreckage from the vessel washes ashore with them.

Both versions of the coin share the same designs, with the reverse of the 2020 1 oz Australian Shipwreck Vergulde Draeck Gold Coin captures the Vergulde Draeck sailing calmer seas at an unknown point in the past. The Vergulde Draeck was constructed for the Dutch East India Company in 1653 and had three years of voyages under its belt before its date with doom on that April night in 1656 off the coast of Western Australia. Surrounding the Vergulde Draeck on this face of the coin is a very ornate maritime border design theme. You will notice the inscriptions on this face of the coin appear upside down when you view the ship upright. If you flip the coin to view the inscriptions upright, you’ll find the ship as it now rests upside down underneath the waters of the Indian Ocean.

Details on the 2020 Vergulde Draeck Releases

Each of the coins in the Royal Australian Mint Shipwreck Series are distinctive triangular bullion coins. The coins are offered by RAM individually inside of triangular acrylic capsules. The silver coin has .999 pure silver content and a total mintage of 20,000 cons, while the gold version has .9999 pure gold content and a maximum mintage of just 250 coins.

History of the Vergulde Draeck

The Vergulde Draeck was a Dutch East India Company shipping vessel that was often used to traverse the Cape of Good Hope around the southern tip of the African continent on the trek between the Netherlands and Batavia in the Dutch East India colony now known as Indonesia. On its final voyage, the Vergulde Draeck was sailing off the coast of Western Australia on its way up to Batavia when it struck a submerged coral reef system overnight on April 28, 1656.

Onboard the ship for that voyage were 193 crewmembers, eight boxes of silver coins valued at 78,600 guilders, and additional trade goods worth more than 103,000 guilders. Of the 193 crew members on board, it was reported that 118 perished in the immediate aftermath of the ship striking the coral reef. Of the 75 believed to have made it to shore, but only eight of those individuals are known to have survived.

Those eight were dispatched from Western Australia in the ship’s barge boat, which survived the sinking, to try and reach Batavia. After a harrowing 41-day journey, those eight people arrived in Batavia to summon help from the Dutch East India Company. Although four subsequent rescue missions were launched from Batavia, the remaining survivors were never found. Their fate remains unknown to this day.

The Vergulde Draeck Shipwreck Series coins are on pre-sale now with JM Bullion and expected to arrive on February 4th to fulfill orders. If you have any questions, don’t hesitate to ask. JM Bullion customer service is available to help at 800-276-6508, online using our live chat, and via our email address. Remember to read our blog post each week for exciting, in-depth information on new and upcoming releases, and don’t forget to follow us on Facebook for daily notes and weekly spot price contests that allow you to win free gold and silver prizes!