Of the bullion coins in the American Eagle Series, the Platinum Eagles have had the toughest road since their 1997 introduction. The bullion version of the coin was launched with four weights and a consistent design. By 2008 though, flagging demand led the mint to cancel the three fractional weights and suspend the one ounce coin for several years. My how the times have changed. With eight months to go in 2019, the United States Mint has announced it has sold out its entire allotment of 2019 American Platinum Eagle bullion coins. 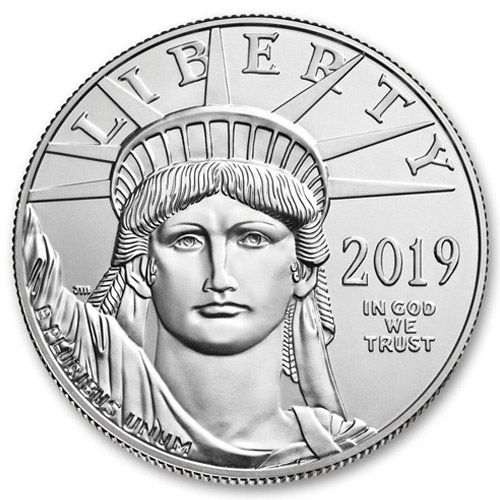 By the end of April, the US Mint announced that it had sold all of the 2019 American Platinum Eagles it planned to strike for the year. The US Mint initially struck and released 30,000 bullion Platinum Eagles for the 2019 date mark. Once those coins were completely gone, the mint announced it would produce a maximum of 10,000 more coins. Those, too, sold out quickly.

The United States Mint opened the sale of 2019 American Platinum Eagle coins on January 7th and during the month of January alone, the mint sold 27,100 coins. Sales dipped to 2,400 coins in February and then went on an upward tear selling 4,000 in March and 6,500 coins in April. With the 2019 Platinum Eagles sold out, the US Mint has no plans to strike and issue more coins for the year.

Significance of the Sellout

With a final sales tally of 40,000 coins for 2019, the sellout of the American Platinum Eagle might not seem significant on the surface. However, when you compare the sale of 40,000 coins this year to the past sales figures for the American Platinum Eagle, a different story emerges. The 2019 mintage is now the fourth-highest mintage in program history. The debut 1997 coin sold 56,000 1 oz platinum coins. The 1998 issue remains the highest in program history at 133,022 coins. The 1999 release notched another 56,707 coins sold. The closest the series has come since that time was 21,800 coins in 2008. That was the last year in which the 1 oz Platinum Eagle was available before its 2009-2013 hiatus.

The Platinum Eagles numbers might seem paltry compared to the other major bullion coins from the mint. For example, each of the 5 oz ATB Coins released in 2018 has a cap of 80,000 for the bullion option. The American Silver Eagle has so far sold 8.1 million coins through April. Gold bullion sales are on the rise at the mint, with 100,000 ounces of American Gold Eagles sold to date. The 1 oz Gold Eagle represents 70,500 coins on its own. The American Gold Buffalo has added another 41,500 gold coins sold.

This is a big achievement for the American Platinum Eagle, without question. The program was popular initially, but fell out of favor with investors and collectors in the 2000s as gold and silver proved a more valuable asset. The 40,000 American Platinum Eagles sold this year is double that of the best mintage figures seen in the series since 2008.

Get Your Hands on the 2019 American Platinum Eagle Now

When the United States Mint struck and released the final allotment of 10,000 American Platinum Eagles for 2019, the vast majority of those coins were picked up by authorized dealers. JM Bullion still has the 2019 American Platinum Eagle in stock for you to purchase right now. If you have questions, don’t hesitate to ask. We’re available on the phone at 800-276-6508, online using our live chat, and via our email address. Don’t forget to follow us on Facebook and remember to check in with our blog each week for exciting news from the precious metals industry and updates on newly released coins.