The Royal Australian Mint introduced an exciting, distinctive coin series in early 2020 with its Shipwreck Series. The four-coin collection offers four individual design elements on the reverse and obverse honoring some of the earliest shipwrecks off the coast of Australia. In the case of each design in the series, the ships featured were owned and operated by the Dutch East India Company and traveled its well-known routes from the Netherlands around the southern tip of Africa toward Australia before heading northeast toward Batavia, modern-day Jakarta, Indonesia. In the final release of this Royal Australian Mint silver series, the Zeewijk features in the design fields of the coin. 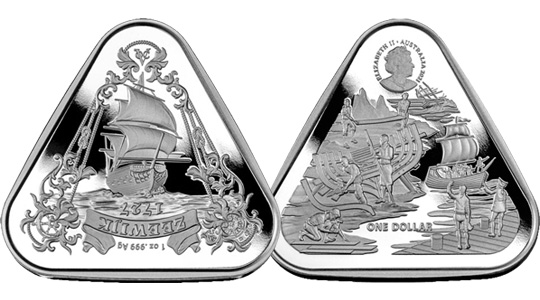 The Zeewijk Sails on the Reverse

In the new reverse design of the 2021 1 oz Australian Shipwreck Zeewijk Silver Coin, you will find the pristine image of the original Zeewijk frame as it sails along smooth waters. The Zeewijk was known as an East Indiaman, a general term used to refer to any ship operated under a charter from the Dutch East India Company. The Zeewijk displaced 275.8 tons and was capable of ferrying a crew of 212 seamen and soldiers. The ship was also well-armed as it carried 36 iron and bronze guns, with six additional swivel guns mounted on the deck. The ship was built in 1725 and wrecked two years later in June 1727.

The Survivors Scramble for Safety in the Obverse

For the obverse design of 2021 Australian Shipwreck Zeewijk Silver Coins, the Royal Australian Mint showcases the aftermath of the Zeewijk’s wrecking off the Houtman Abrolhos off the west coast of Australia. The design element shows the wrecked Zeewijk in the background, with the surviving sailors and soldiers in the foreground salvaging parts of the Zeewijk in an attempt to build another ship to sail on for Batavia in hopes of surviving. At the top of the coin’s triangular design field, you will notice the right-profile effigy of Queen Elizabeth II. This is the sixth-generation effigy used on Australian coins and is adapted from Jody Clark’s 2015 portrait for the Royal Mint of England.

As the fourth and final release, the Australian Shipwreck Zeewijk release comes with individual plastic capsules and a limited mintage of just 20,000 coins. The coins in this series are not only distinct for the use of new designs on each coin but also the one-of-a-kind triangular shape. The coins are housed inside custom capsules with the same triangular shape for perfect storage and protection. The coins in this series have alternating designs of each shipwreck. On the reverse of each coin, the ship is shown as it looked after it was berthed. The obverse field of the coin boasts scenes of the shipwreck that ended the usable life of the ship, as well as an effigy of Queen Elizabeth II.

The Zeewijk suffered a fate that many other Dutch East India Company vessels met with while crossing the Indian Ocean. Built in 1725, the Zeewijk departed for the Dutch East India Company trading hub of Batavia, the modern-day city of Jakarta, Indonesia, in 1726. On its maiden voyage, the Zeewijk’s captain opted for a port call on the coast of Western Australia near the end of the voyage. Ignoring the directives of the established Brouwer Route, he failed to turn northeasterly soon enough and wrecked the ship on the shoals of the Houtman Abrolhos off the Australian coast.

Significance of the Zeewijk Wreck

The Zeewijk was one of many Dutch East India Company ships to wreck off the Australian coast, but it is indelibly etched into human history for the actions of its survivors in the aftermath. The Zeewijk did not sink entirely upon striking the shoals but was locked into the reef due to the severity of its collision. 10 crew members died in the immediate aftermath while trying to abandon ship and get to nearby Gun Island. One month after it struck the reef, the Zeewijk’s surviving longboat was used by 11 survivors and the ship’s First Mate to make an attempt to sail to Batavia to seek assistance for the shipwrecked crew. Those individuals were never heard from again.

It was the actions of the surviving crew that etched the ship’s name in history. After four months and no word from the longboat crew, the remaining crew members began harvesting lumber from the Zeewijk and laid down the keel for a new ship. Known as the Sloepie, the new ship’s keel was laid in November 1727 and launched in February 1728 to ferry the remaining survivors to Batavia. The Sloepie was the first-ever European ship constructed in Australia. In March 1728, 88 men set sail for Batavia and made it there one month later, ensuring the survival of those they left behind on Gun Island.

Now is your chance to complete your Australian Shipwreck Collection with the purchase of the Zeewijk. If you have any questions, please contact JM Bullion. Our customer service team is available at 800-276-6508, online through our live chat, and via our email address. Don’t forget that you can follow us on Facebook and check our weekly blog posts for a look at upcoming new releases.