The Perth Mint Adds Another Marsupial to its Silver Collections

For those familiar with the broad range of gold and silver coins available from the Perth Mint in Western Australia, there is one noticeable design trend that stands out: native animals. The Australian continent is home to a wide range of unique animal species, in particular, a variety of different marsupial species. Since 1990, the Perth Mint has added animals like the kookaburra, koala, wedge-tail eagle, kangaroo, and emu to its release schedule. There’s another marsupial now available on Perth Mint proof coinage that celebrates the distinctive animals of the Australian continent. You can now learn about this latest release from the Perth Mint in our weekly post. 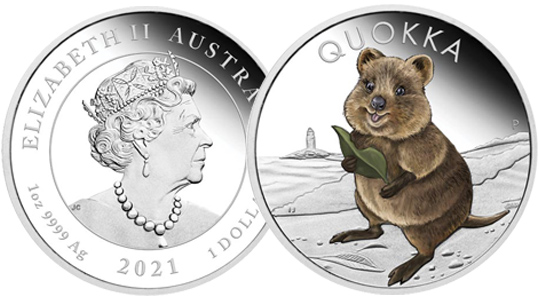 As a collectible proof coin from the Perth Mint, the 2021 1 oz Proof Colorized Quokka Silver Coin comes with a limited mintage figure and special packaging for collectors. Each of the 1 oz silver coins in this release comes with a black display that has a clear, Perspex lid on the case that shows off the colorized reverse design. The lower-left corner of the Perspex lid has the swan logo of the Perth Mint. Each one of the coins also comes with a full-color presentation box for shipping. The box actually replicates the reverse design background, showing off the beautiful shoreline of Western Australia where the quokka lives with a lighthouse visible in the distant background. The coins in the 2021 Silver Quokka issue have a limited mintage of 5,000 specimens and have 1 Troy oz of .9999 pure silver content.

In the first-ever release of an Australian Silver Quokka coin, the Perth Mint captures the cuddly marsupial holding a leaf in its front paws as it stands near the shoreline. The quokka is a bit of a social media star in the 21st century as the animals are accustomed to the presence of humans visiting their native habitats and even snapping selfies with the creatures. The quokka is a marsupial from the wallaby family and is also referred to as the short-tailed scrub wallaby. In this colorized release, the quokka is captured in its natural shades of brown throughout its fur with a green leaf in its paws. As proof coins, each specimen has frosted designs overlaying mirrored fields.

For the obverse side of 2021 Proof Colorized Quokka Silver Coins, the Perth Mint continues with its use of the sixth-generation effigy of Queen Elizabeth II. During her record-setting reign, Her Majesty has been depicted in five different reliefs on Royal Mint coins in England and six reliefs on Australian coins from the Perth Mint. This right-profile portrait of the Queen was initially designed in July 2015 by Jody Clark. It depicts the Queen wearing the George IV State Diadem Crown, a piece that comes from the official Crown Jewels. In this distinct Australian portrait, Her Majesty’s full neckline and shoulders are included in the picture. This is a first on Australian coins since 1966.

Background on the Quokka

Quokkas are roughly the size of modern, domesticated house cats. The quokka is, broadly speaking, a member of the macropod family of marsupials, making it a cousin to the kangaroo and wallaby. Like its cousins, the quokka is herbivorous and is primarily active at night. Quokkas were first seen by non-Aboriginal people on the Australian continent in 1658. As Dutch mariners arrived on Rottnest Island that year, an individual recorded seeing what he believed were wild cats. Nearly 40 years later, another Dutch mariner recorded seeing quokkas and considered them to be giant rats. That mariner, Willem de Vlamingh, named the island ‘t Eylandt ‘t Rottenest, the Dutch term for rat nest.

With a limited mintage and beautiful presentation, the 2021 Silver Quokka won’t be in stock long. If you have questions when you buy silver, please don’t hesitate to ask. JM Bullion customer service is available to assist you with questions at 800-276-6508, online using our live chat, and via our email address. You can follow us on a daily basis on social media, and read our weekly blog posts to get an in-depth look at the newest items in our catalog of precious metals.