The Grand Watermelon Note Returns on a Replica Silver Bar

In the pantheon of American paper currency, the Treasury Note Series of 1890-1891 is not particularly memorable for its breathtaking designs and impressive artistry. Many collectors seek out the designs of the historic Silver Certificate and United States Note Series, such as the imagery from the 1901 Bison Note and the Educational Series. However, there is one memorable design from the Treasury Note Series that has proven exceptionally popular with collectors for its unique visual elements. Known as the Grand Watermelon, existing specimens from the original release are extremely rare, but there is still a way to own this design on a modern bullion silver bar. 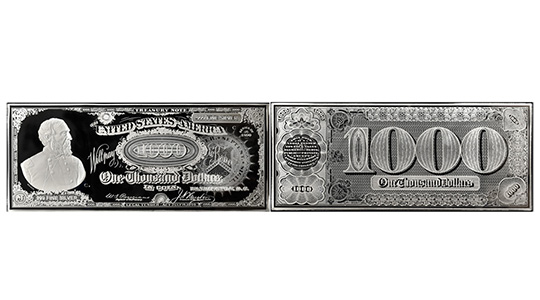 The release of the 4 oz 1890 $1000 Treasury Grand Watermelon Note Replica Plate Silver Bar precisely duplicates the images from the 1890 Treasury Note release in this denomination on a large, plate silver bar. The bar contains a total of 4 Troy oz of .999 pure silver with obverse and reverse designs inspired directly by the Grand Watermelon Note. The bars are available for purchase with individual plastic capsules to secure the specimen for shipping and delivery.

On the obverse side of 1890 $1000 Treasury Grand Watermelon Note Replica Plate Silver Bars, you will find an effigy of General George Meade. General Meade’s portrait captures him in right-profile relief wearing his Union Army uniform from the Civil War. All of the inscriptions on this face, save the notations of the weight, purity, and metal content of the bar, accurately reflect the printed notations found on the original 1890 $1000 Treasury Notes. General George Meade was a trained civil engineer, but he spent most of his life serving in the US Army. He first served in the Second Seminole War in Florida in 1835-1836 before leaving the service for several years. He returned to the US Army in 1842 and would serve with distinction for the next 30 years, rising from the rank of 2nd Lieutenant in 1842 to finish his career as a General in charge of the Army of the Potomac during the Civil War. His greatest achievement in service to the Union Army came in his defeat of Confederate General Robert E. Lee at the Battle of Gettysburg.

The reverse design of the 1890 $1000 Treasury Grand Watermelon Note Replica Silver Bar lacks any standout artwork such as an influential figure’s portrait, a work of art, or other mural. However, it is this large inscription of the numeric denomination of the note on this face that gave the note and this bar its lasting nickname. At the center of the design are four large numbers indicating the face value of “1000.” When the original notes were issued, the American public quickly latched onto the appearance of the three zeros in the denomination. With a green ink print in the original note and unique shape and pattern, the zeros each resembled a watermelon. Given the large size of the zeros and the large denomination of the note, it quickly became known as the Grand Watermelon.

Why the “Grand Watermelon”?

As noted above, the original note that inspired this bar was known as the Grand Watermelon for the appearance of the zeros in the reverse design field. The United States Treasury issued these notes in 1890 with black ink on the obverse field, red ink on the serial numbers, and a large  US Treasury seal on that side in brown ink. The reverse field had a predominantly green ink to its print, enhancing the perception that the zeros resembled watermelons.

History of the Treasury Note Series

The Treasury Note Series was a short-lived form of representative paper money issued by the federal government. The notes were issued in two series: 1890 and 1891. The designs and denominations of these series were printed and redeemable through 1893. The notes were printed as a result of the Sherman Silver Purchase Act, a law that required the federal government to purchase silver to the tune of 4.5 million ounces per month to help bolster the economy at a time when there was a glut of silver coming from mines in the Western United States. The 1890 $1000 Treasury Note was the largest denomination in the series and debuted alongside denominations of $1, $2, $5, $10, $20, and $100. The 1891 Series introduced a $50 denomination. While a $500 denomination was designed, it was never printed and issued.

These replica silver bars are available from JM Bullion only while supplies last. If you have any questions, please contact us at 800-276-6508, chat with us live online, or email us directly. We encourage you to visit our blog each week for more in-depth reads on upcoming and new release and follow us on Facebook as well.