Since 2016, the Royal Mint of England has dazzled investors and collectors with the designs of the Queen’s Beasts on silver, gold, and platinum coins. Each of the 10 creatures depicted as wooden statues at the coronation ceremony of Queen Elizabeth II in 1953 has appeared in this series, with a single release in 2016, two releases each in 2017, 2018, 2019, and 2020, and now, a final design in 2021. The White Greyhound of Richmond rounds out the 10-coin series with a full complement of beautiful issues. Read on to learn more about the new Queen’s Beast White Greyhound of Richmond release. 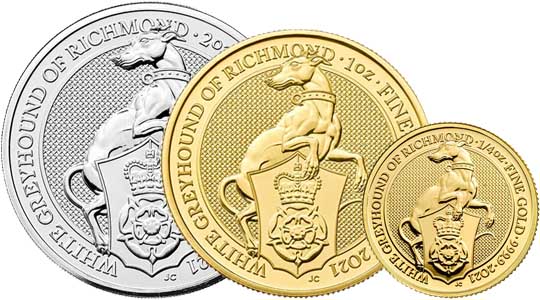 On the reverse side of the new 2021 2 oz British Silver Queen’s Beast White Greyhound Coins, you will find the final design in this beautiful series. Here, the White Greyhound of Richmond is depicted in a similar style to James Woodford’s original design. The greyhound species of dog is shown sitting back on its hind legs with its front paws dangling over the front of a shield. That shield is the seal of the House of Tudor and features a double-rose design. On the shield, you will notice the Tudor double rose, with the background field splint evenly down the center. The crowned shield has another rose surmounted within the crown.

The obverse face of 2021 1 oz British Gold Queen’s Beast White Greyhound Coins features the definitive fifth-generation effigy of Queen Elizabeth II. Her Majesty is shown at the age of 89 in this depiction that was created in July 2015 by Jody Clark specifically for the Royal Mint of England. In the portrait, the Queen is wearing the George IV State Diadem Crown. A part of the official Crown Jewels, the State Diadem was commissioned in 1820 during the first year of the reign of King George IV and it includes 1,333 diamonds in its setting that weigh more than 300 karats in total.

In addition to these primary bullion coins, the Royal Mint will also issue 10 oz silver coin in this design, as well as a 1 oz platinum coin. These investment-grade coins will eventually be complemented by a range of gold and silver proof options with the same design.

The White Greyhound of Richmond

The greyhound is a favored dog species among the residents of Northern England, from a historical standpoint. The White Greyhound took a long route to get to the Royal Arms of England. The greyhound was first used in the badge of John of Gaunt, the 1st Duke of Lancaster and Earl of Richmond. John of Gaunt was the third son of King Edward III. John’s son would eventually also use the White Greyhound in his badge as King Henry IV of England. Henry IV was Edward III’s grandson and asserted his right to the throne through his grandfather.

Under King Henry VII, the White Greyhound of Richmond often replaced the Lion of England as a supporter of the Royal Arms. As this design shows in the Queen’s Beast Series, the White Greyhound would often support the seal of the House of Tudor. The seal includes a double-rose of white at the center and red surrounding to symbolize Henry VII’s unification of the cadet houses of the Plantagenets: House of York and House of Lancaster.

Now is your chance to complete your investment in the 10-coin Queen’s Beast Series from the Royal Mint of England. The White Greyhound of Richmond is available for presale at JM Bullion starting September 2020. If you have any questions, please contact our customer service team at 800-276-6508, chat with us live online, or simply send us an email with your inquiries. Remember to check for our weekly blog posts with in-depth insight on upcoming and new releases, and don’t forget to follow us on Facebook for daily posts and chances to win precious metals in our spot price contests.