The Allegories Returns to Europe with the Italia & Germania Release

One of the most popular collections of silver rounds available right now is The Allegories, a collection of rare .9999 pure silver rounds from the Germania Mint. The private mint has a range of different collections, all of which started in 2019 as the mint began to expand around the world. Among those, arguably the most popular is the Germania Series. The collection features the female allegory for the German people, Germania, alongside various other female allegories from nations such as Britain, America, and now, Italy. The third release of the Germania Series is now available and features the combined Italia & Germania designs. Read on below to learn about the history of the designs on the newest release. 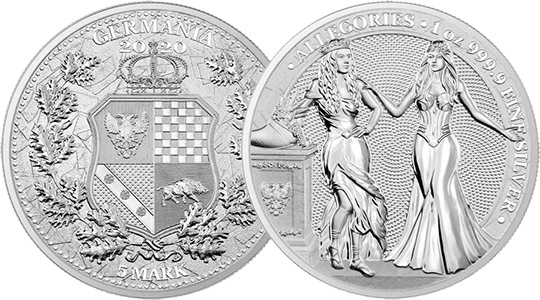 The obverse side of the 2020 1 oz Germania The Allegories Italia & Germania Silver Round features an all-new design pointing to the history of the German and Italian people. Like previous releases in this series, Germania is depicted alongside another female allegory. In this case, the design of the female figure to the left of the design field is Italia. Known officially as Italia turrita, this figure is the national personification of Italy and is shown in an elegant, flowing gown that reflects her stunning beauty. She stands leaning slightly on her right hand against a pillar upon which a cornucopia rests. The cornucopia is symbolic of wealth and good fortune, and if you look closely, you will notice the double-headed eagle that serves as the logo of the Germania Mint. Italia wears the turreted crown, an ancient symbol associated with Italia that dates back to the Roman Empire.

Next to Italia on the right-hand side of the design field is the figure of Germania. As with other releases, Germania strikes an accommodating pose as she rests her right hand on the shoulder of Italia as she extends her left hand outward as if inviting Italia to sit down with her or join her on a walk. The design rim on this side includes the series name and the weight, metal content, and purity of the rounds.

On the reverse field of 2020 Germania The Allegories Italia & Germania Silver Rounds is the ornate coat of arms developed by the Germania Mint. This detailed design features a crowned shield, itself symbolic of authority, nobility, and chivalry. The shield is quartered, with each quadrant offering heraldic symbols of importance to various different cultures. The double-headed, or bicephalous, eagle in the first quadrant comes from Roman mythology. The beast was associated with the god Janus, guardian of doors and god of origins. The second quadrant has a check pattern reflecting wisdom and prudence. The gold ribbon with flowers symbolizes unity, integrity, and freedom. The fourth quadrant has a wild boar, a symbol of might and power used by legions in the Roman Army. The entire design element is surrounded by a wreath made of oak leaves, a symbol of loyalty, stability, and national unity. In ancient times, this type of wreath was only wielded by those with impressive power.

Background on Germania and Italia

The full name of the Italian female personification is Italia turrita, which translates into English as “turreted Italy.” The history of the terminology dates back to the 3rd century BCE. The first appearance of a turreted woman was that of Cybele, a deity associated with fertility in the Anatolian region of what is modern-day Turkey. During the Second Punic War, fought between 218 BCE and 202 BCE, Hannibal was raging through the Roman Empire and had invaded mainland Italy. Roman priests predicted that Rome could only be saved by the symbol of Cybele. An effigy of Cybele was transferred to the Temple of Victory in Rome. Thereafter, the Roman Army defeated Hannibal’s forces at the gates of the city and saved the empire.

In the aftermath, Cybele became a deity of Rome and was referred to as the “Great Mother.” In the modern era, Italia was depicted as a woman with a fair, luxurious physique with what have been classified as Mediterranean attributes. She often has a Mediterranean complexion with dark hair. She is often depicted with ears of wheat in hand as a symbol of fertility and representation of the agricultural prowess of the Italian peninsula. In many modern images, she is shown with a green, white, and red dress after the 1797 adoption of a modern Italian flag.

Now is your chance to build on Britannia and Columbia designs already available in The Allegories Series. The mintages of each weight in the series are limited, so don’t waste time collecting your new Italia design. If you have any questions, please feel free to reach out to JM Bullion. Our customer service team is available to you on the phone at 800-276-6508, online through our live chat, and via our email address. Remember to follow us on Facebook and check-in with our blog posts each week to get detailed information on upcoming releases.