Collectors of the Proof American Platinum Eagle coins are aware that the reverse design elements of this coin series change on a regular basis. The ever-changing images of the American bald eagle and Liberty on this coin are part of the allure of the program. However, the launch of the Preamble to the Declaration of Independence Series launched in 2018, and scheduled to run through 2020, includes a big first for the series. The reverse side will remain constant throughout this three-coin issue while the Liberty design from John Mercanti on the obverse takes a backseat in favor of new designs. Learn more about the collection and the second of the three coins right now! 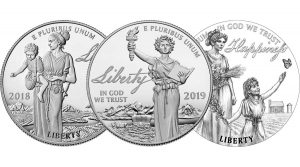 The Preamble to the Declaration of Independence

The new Preamble to the Declaration of Independence Series for the Proof American Platinum Eagle coins introduced the first change to the obverse design of the coins since the 1997 debut of the collection. Gone is Mercanti’s vision of Liberty from the Statue of Liberty. In her place are vibrant new designs of Liberty depicting the three core tenets laid out by the Founding Fathers in the very opening to the Declaration of Independence. There is also a new reverse design for the series that will be common across all three releases.

In that Preamble to the Declaration of Independence, the Founding Fathers set for the following ideal right off the bat:

“We hold these truths to be self-evident, that all men are created equal, that they are endowed, by their Creator, with certain unalienable Rights, that among these are Life, Liberty, and the Pursuit of Happiness.”

It is those final three remarks that serve as the focus of the design elements in the new Proof American Platinum Eagle Series. Each of the three releases combines a unique vision of Liberty with handwritten inscriptions engraved onto the coins.

The 2019 Proof American Platinum Eagle Coin is the second release in the three-coin series. Representing Liberty, the 2019 design captures the American spirit to seek out the life that each individual wants. For this obverse design, Liberty stands in the forefront with a wreath crown on her head and her bright torch held high in her right hand. The word “Liberty” is featured as the handwritten inscription with “E Pluribus Unum” and “In God We Trust” also inscribed on this side in standard text. The coin’s date mark is also featured on this side.

In the background of the obverse design field is the very idea of Liberty that many early Americans chased. The right to shape their own destiny played out, for many, as a westward move to new farm lands and greater space. As a mountain range reaches upward in the distant background, an ox-led wagon approaches a river’s edge.

The reverse of 2019 Proof American Platinum Eagle coins includes the common design element for the series. Here, an American bald eagle swoops into view with its wings spread wide to guide its flight as its talons clutch a long olive branch. Inscriptions include “United States of America,” “$100,” and “.9995 Platinum 1 oz.” This side of the Proof American Platinum Eagle also features the “W” mint mark of the West Point Mint.

Packaging Information and Other Details

The 2019-W 1 oz Proof American Platinum Eagle Coin is available with a beautiful, blue presentation box from the United States Mint. The coins come with a Certificate of Authenticity and have a limited mintage of just 15,000 coins in total. The coins each contain 1 Troy oz of .9995 pure platinum and boast frosted design elements overlaying a mirrored background field.

The first release in the series proved massively popular, and the 2019 Proof American Platinum Eagle is sure to follow suit. In 2020, the United States Mint will release the final coin in this collection with a new design of Liberty depicting the Pursuit of Happiness.

Get Your 2019 Proof Platinum Eagle Now!

JM Bullion now proudly offers the 2019-W 1 oz Proof American Platinum Eagle coin to you for purchase online. You can contact our customer service team with any questions about platinum coins by calling 800-276-6508, chatting with us live online, or simply sending us an email. Don’t forget to check back each Friday for a new blog and follow us on Facebook for daily updates on our catalog and the chance to participate in spot price contests.