The Perth Mint released a stunning new interpretation of bullion coinage on February 1st with the issue of its first-ever rectangular bullion coin. The mint has previously released proof coins with rectangular shapes, but never before has it offered bullion investment coinage in this shape. In keeping with its popular Chinese lunar motifs, the Perth Mint has chosen the dragon as the design element to grace this new investment option.

For the 2018 Australian Dragon Rectangular Coins, Perth Mint is offering both a silver and gold option to investors. You have your choice between the two with .9999 purity in either metal. The mint is capping the mintage figures very low on these coins, which like many other Perth Mint products is likely to sell out quickly. The 2018 1 oz Australian Rectangular Silver Dragon Coin is currently available to purchase online from JM Bullion. Learn all about this exciting new release below.

Perth Mint offers this beautiful design on a new format for bullion coinage, with both silver and gold available only in the 1 oz weight option. The gold coin features .9999 pure gold content, a face value of $100 (AUD), and a mintage capped at just 25,000 coins. For those who buy silver, the 2018 Australian Rectangular Dragon coin comes with .9999 pure silver content, a $1 (AUD) face value, and a much higher mintage cap of 500,000 coins. The primary highlights of this exciting new release include: 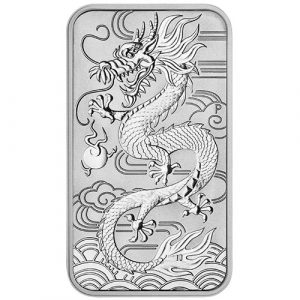 Both the gold and silver coins for sale in this release share the same obverse and reverse design fields. The obverse of the coin features the popular right-profile portrait of Queen Elizabeth II. Her Majesty’s effigy as portrayed here is a fourth-generation work created in 1998 by Ian Rank-Broadley for Royal Mint coins and other commonwealth nation issues. There is a sunburst background design framing Her Majesty’s bust, while the initials “IRB” feature immediately below her figure. Above are engravings of “Elizabeth II,” “Australia,” and “1 oz 9999 Ag.” At the bottom of the 2018 Australian Dragon Rectangular Coin is the face value as “1 Dollar” and “2018.”

The reverse side of the new 2018 Australian Rectangular Dragon Silver Coin features a design from Ing Ing Jong. The ornate design elements include the winding body of a long dragon arranged with its head at the vertical top of the bar as it snakes down to the bottom. The dragon has four legs and flowing elements around its neck and tail. The background field features wind, clouds, and water in a stylized format with a single flaming pearl in the design field’s middle range. The “P” mint mark of the Perth Mint is also included.

As with other initial bullion releases, these new Rectangular Dragon Coins are available in BU condition. Known as brilliant uncirculated, the coins lack any indication of wear and tear as a result of handling. However, it is possible for minor flaws stemming from the coining process to be present. These flaws are limited in nature to breaks in the luster, spotted surfaces, and contact marks.

The Dragon and Chinese Culture

In Chinese culture, the dragon is a legendary creature that is found throughout mythology and common folklore. Traditionally, dragons were actually depicted in many animal-like forms ranging from turtles to fish. The most common, then and now, however is the depiction of a dragon as a snake-like creature with four legs. Dragons have played a role in the cultural folklore and mythology of various human civilizations from Western to Eastern society.

The dragon is often depicted differently between the regions of the world though. While the use of a snake-like creature with four legs and no wings is common in Chinese lore, Western civilizations envisioned larger dragons with powerful bodies and wings capable of powering them through the air in flight.

As for the Chinese dragons, the creatures are typically used as a symbol of potent and auspicious power. In most cases, this included control over water, rainfall, typhoons, and floods. This common association with power is included in the designs of this new 2018 Rectangular Dragon coin with the background elements of wind, water, and clouds. Today, the dragon remains important to Chinese culture. For example, individuals with outstanding personal characteristics are often compared to dragons for their excellence and achievements.

For those investors and collectors who routinely purchase Perth Mint gold and silver, Ing Ing Jong requires no introduction. The talented illustrator is famous for the creation of the reverse design fields on the Lunar Series II collection, one of Perth Mint’s most popular coin programs to date. Jong joined the Perth Mint as a coin designer in 2011, and was placed in charge of the prestigious Lunar Series II designs in 2013, creating both the unique silver and gold designs found on the coins each year.

Jong is a graduate of the Central TAFE School of Art and Design in Perth, Western Australia. She graduated in 2006 with an Advanced Diploma in Graphic Design, specializing in illustration and multimedia. She also holds a Bachelor of Multimedia from Curtin University, where she studied animation, web design, illustration, and video editing.

Few mints have the global reputation of Perth Mint. Though it is not the official sovereign mint of Australia, a duty held by the Royal Australian Mint in Canberra, the Perth Mint is the most historically prestigious mint in the nation today. Opened in 1899 as the third and final Royal Mint facility on the continent, it is the only remaining facility from that system following the closure of the Sydney Mint and Melbourne Mint in 1926 and 1969, respectively. Today, Perth Mint is the oldest operating facility in the country.

If you want to add the 2018 1 oz Australian Rectangular Dragon Silver Coin to your portfolio, it’s available for sale now with JM Bullion. As always, you can contact us with your questions at 800-276-6508, chat with us live online, or email us with your inquiries. Don’t forget to check in with our blog each week and follow us on Facebook for the latest updates to our blog and catalog.