Stretched by COVID-19, the US Mint Turns to the Philadelphia Mint for Silver Eagles 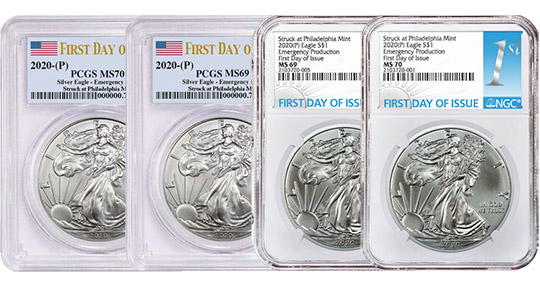 As the COVID-19 pandemic reached American shores and states shutdown, the economy was shuttered and stock values plummeted. The demand for gold and silver surged, sending interest in the American Silver Eagle through the roof. After just one week of increased demand, the West Point Mint sold out of its available 2020 Silver Eagles in stock to provide to authorized dealers. As a result, the West Point Mint got to work striking more 2020 Silver Eagles to meet the continued demand.

However, as the West Point Mint resumed production, lockdown orders in the state of New York stressed the coining capacity of the West Point Mint. Safety measures forced the mint to reduce staffing to protect against the spread of the virus. A further hiccup came along when the West Point Mint was forced to shut down from April 15-20. Fortunately, the United States Mint enlisted the Philadelphia Mint to help meet demand for the coins. From April 8th to April 20th, the Philadelphia Mint produced an additional 240,000 2020 Silver Eagles to get more coins out to investors.

There are two options available for purchasing the Emergency Issue 2020 (P) American Silver Eagles. JM Bullion has the coins available in US Mint Monster Boxes with a total of 500 silver coins. The coins in the Monster Box are housed inside of 25 individual tubes of 20 coins each. We also have 2020 (P) American Silver Eagle Coins inside of NGC Gem Rolls with an Early Release label. All 20 coins in the tube are sealed together for long-term storage and come with the ER label denoting the arrival of the coins at the NGC for grading within 30 days of the original release in April from the Philadelphia Mint.

Large volumes of 2020 (P) American Silver Eagle coins were certified by the Numismatic Guaranty Corporation and Professional Coin Grading Service. Each of the coins comes with a protective plastic slab. The coins come with the following labels available:

The Philadelphia Mint was first established in 1792 when the Coinage Act of 1792 formed the foundation of the United States Mint. The Philadelphia location was chosen because the city was the nation’s capital at that time. The first mint building in the city was used until 1833, the second from 1833 to 1901, the third building from 1901 to 1969, and the current building has been in operation since 1969.

All of the 2020 (P) American Silver Eagles produced as an Emergency Issue at the Philadelphia Mint are now available for presale online at JM Bullion. If you have any questions, please contact JM Bullion customer service. We are available at 800-276-6508, online using our live chat, and via our email address. Don’t forget to follow us on Facebook for daily updates and weekly contests, and remember to visit our blog each week for new updates on products.