Start Your Collection of Toy Soldiers with the Bazooka Silver Soldier

For nearly a century, toy soldiers have been a staple in American homes at some point in time or another. Young children dating back to 1938 have played out their own concepts of war with little plastic soldiers. The first soldiers were created with images and weaponry reflective of World War I, but today’s Army Men typically carry the weapons of war from World War II and Vietnam. Those popular little Green Army Men come in a variety of stances and now the silver enthusiast in you can capture a grown-up version of those toy soldiers. The new 5 oz Stovepipe Sterling Soldier Statue is the debut in the Silver Soldiers Collection of statues from Heads or Tales Coin Company. 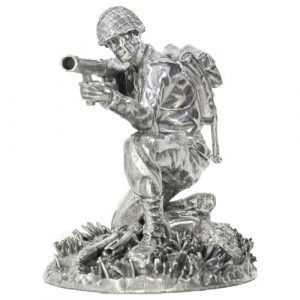 Meet Sterling and His Bazooka

Sterling is the first character to feature in the Silver Soldiers Collection and he bravely steps out of a secure position to expose himself in an effort to protect his brothers-in-arms. The United States Army widely fielded the bazooka during World War II as a man-portable anti-tank weapon. The bazooka, technically known as the M1, is a solid-propellant rocket that fires high-explosive anti-tank rounds. During World War II, the US Army used bazookas to combat German tanks, machine gun nests, and other fortified positions.

This 5 oz Stovepipe Sterling Soldier Silver Statue contains a total of 5 Troy oz of pure silver, which in this case indicates .925 silver content. Sterling is the man in his unit tasked with wielding the stovepipe, a common name for the bazooka during the 1930s and 1940s after a musical instrument created and used by comedian Bob Burns in the 1930s. Sterling kneels as he slings the stovepipe up onto his shoulder to fire at a tank or fortified position. These statues have a beautiful antique polish applied by HotCo that delivers an heirloom-quality finish to the product. Sterling is the first member of his unit to feature in this exciting new collection of silver statues.

The new Silver Soldiers Collection from HotCo will eventually feature various Army Men commonly found in the popular plastic green toys produced over the last five decades. Each of the statues will feature .925 silver content and offer varying weights. All statues have HotCo’s antique polish and feature engravings on the base of the statue that identify the weight and metal content, along with the individual serial number. Each of the statues is individually boxed and comes with a Certificate of Authenticity from HotCo, and the casting limit for each release is set at 1,000 statues.

The full range of silver statue designs in this collection at HotCo is not yet known, but the next two releases in the series are known. Captain Troy and Arty Red Leg are the next silver statues to come in this stunning collection. Captain Troy is the company commander and is prepared to oversee the tactical and everyday operations of the men under his command. Arty Red Leg comes from the famous Field Artillery Branch of the United States Army. Known by the nickname Redlegs, soldiers assigned to Field Artillery are responsible for raining down rounds on enemy positions to protect their brothers-in-arms and support the advance of American forces.

Start Your Collection with JM Bullion

You can start your Silver Soldiers collection today by purchasing Stovepipe Sterling from our online catalog. Guard your desk or office with each member of this company of silver statues and complete your Silver Soldier Collection with each follow-up release from HotCo in this series. If you have any questions about buying silver in this collection, we’re always ready to help at 800-276-6508, online through our live chat, and via our email address. Follow us on Facebook for the latest information on new releases and check in with our blog each week.