Born on the island of Corsica in 1769, Napoleon Bonaparte died in exile on the island of St. Helena two hundred years ago. With the production of silver coins from the Issuing Authority of St. Helena increasing in recent years, 2021 saw an opportunity for the island to produce a bicentennial coin commemorating the death of the island’s most famous resident. The newest St. Helena silver bullion coin available through its partnership with the East India Company is the St. Helena Napoleon Angel. Learn all about this new release in our weekly blog post. 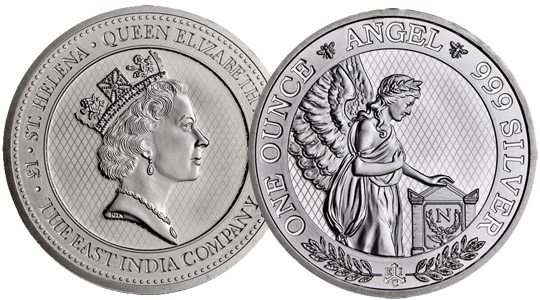 The reverse side of the new 2021 1 oz St. Helena Napoleon Angel Silver Coin comes with a beautiful commemorative design. The image features a winged angel standing at a headstone that is engraved with an “N” for Napoleon. The angel has one hand on her chest and the other resting on the top of the headstone. There is a wreath around the “N” on the headstone and an imperial eagle beneath.

This design is inspired by Napoleon’s tomb at Les Invalides in Paris. The site is a broad complex in the 7th arrondissement of Paris that has museums and monuments charting the military history of France, along with a hospital and retirement housing for retired military veterans. The site was authorized by King Louis XIV in November 1670 as a home for aging and disabled soldiers. Following Napoleon’s death in 1821, his body was initially buried on St. Helena. In the 1840s, his body was returned to France and given an impressive burial inside a tomb built within Les Invalides. His body now lies within an open crypt in the Dome of Les Invalides, with his remains held inside a sarcophagus of purple quartzite that rests on a block of green granite.

On the obverse of the 2021 St. Helena Napoleon Angel Silver Coin is a depiction of Queen Elizabeth II. The island of St. Helena is a British Overseas Territory with Elizabeth II as its monarch. This portrait is a right-profile image that was created in 1985 by Raphael Maklouf for the Royal Mint. The depiction shows the Queen with the George IV State Diadem Crown. The very edge of the design field has a detailed, beaded border.

The coins in this series issued by the East India Company are available with 1 Troy oz of .999 pure silver in Brilliant Uncirculated condition. The coins are housed individually inside of plastic flips, by multiples of 20 in acrylic tubes, and by multiples of 500 coins inside of a mint-sealed Master Box. The box holds 25 tubes of 20 coins each. The coin was struck to mark the 200th anniversary of Napoleon’s death with no set mintage figure.

History of Napoleon and St. Helena

Napoleon’s life was defined by warfare and island living. He was born into a respected family on the island of Corsica. Shortly after his birth, the island changed hands from Italy to France. Bonaparte’s father served as the representative of the island in the court of King Louis XVI. During the French Revolution, Napoleon emerged as a talented military tactician. He became the First Consul of the new French Republic in 1799 and would soon lead the European continent into more than a decade of constant warfare. From 1804 to 1814, Napoleon defeated one coalition of European powers after another in expanding France’s grip on the continent and its cultural influence.

Like many military dictators, Napoleon’s good luck came to an end. In 1814 his forces were defeated by a sixth coalition of European nations. He was exiled to the island of Elba but would manage to escape and briefly return to power in France. After a seventh coalition formed to push him back again, Napoleon’s defeat at the Battle of Waterloo resulted in his exile much further away. This time, he was sent to the southern Atlantic Ocean and the volcanic island of St. Helena. He would later die there in 1821.

The modern East India Company reformed in 2010 and began issuing coins again in 2012. The company works with the Issuing Authority of St. Helena to produce coins on its behalf. The historic East India Company was formed in 1600 and later took control of St. Helena in the 1650s as a refueling stop for its vessels traveling between the British Isles and the East Indies region of the Indian Ocean.

Now is your opportunity to get the new Napoleon Angel Silver Coin from JM Bullion. Our customer service team is available to assist you at 800-276-6508, online through our live chat, and via our email address. You can also follow us on Facebook and read our weekly blog posts for more information on our new and upcoming product releases.