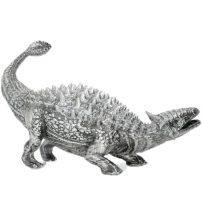 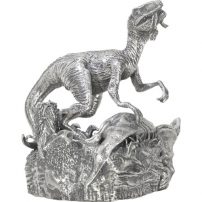 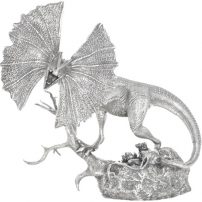 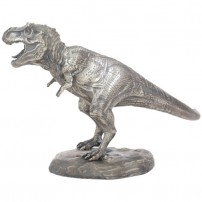 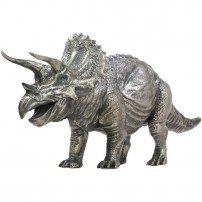 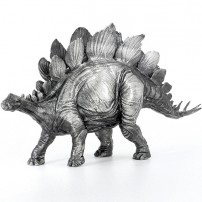 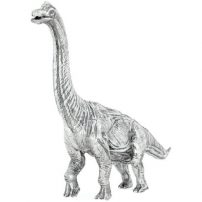 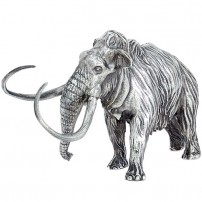 Private refineries are helping push the precious metals marketplace forward into a new era, one wherein heirloom silver has immense value to both investors and collectors. The variety of silver statues on the market today demonstrates the continued strength and diversity of precious metals, providing collectible demand even at times when investment-grade bullion sags in pricing and demand.

Leading the charge in this field is Silver Statues. Silver Statues has developed a number of different silver statue programs, and one of the most popular takes collectors back in time some 65 million years to a time when unbelievably large, ferocious beasts roamed the planet Earth. The Lost World Collection of silver statues offers exciting options, and you can learn all about it below!

Marketed as a collection “65 million years in the making,” the Lost World Series pays homage to the massive beasts that dominated the planet long before mankind could make its mark on the world. Each of the four beasts featured in this exciting collection has been reimagined with superb craftsmanship and incredible attention to detail. From ancient reptiles to the enormous Woolly Mammoth, learn all about the individual releases.

For each release in the series you’ll note the statues:

The most infamous dinosaur from the age of those massive beasts was the Tyrannosaurus Rex. This beast of an animal captured the imagination of millions around the globe in the famous Jurassic Park release in the 1990s, and its skeletal remains have been found in countless locations around the globe. The first release of the series is the T-Rex Silver Statue.

The Tyrannosaurus Rex, known better as T-Rex, is so-named because it is believed to have been the “tyrant lizard,” with Rex the Latin for “king.” T-Rex lived throughout the continent of modern-day North America and on the island continent known as Laramidia, and has been found in fossil records dating to between 68 and 66 million years ago.

T-Rex creatures were truly unique beasts, with a massive skull on its body balanced out by a long, heavy tail. The powerful hind limbs were much larger than the short fore limbs, which were nonetheless unusually powerful for their size. Although it is often depicted as an apex predator in films and other presentations, the T-Rex is believed to perhaps have been more of a scavenger that capitalized on the kills of other predators by scaring them off with sheer size and intimidation.

All 8 oz. Antique Finish T-Rex Silver Statues feature a 70 mm tall depiction of the famous lizard king. Each statue has a proprietary antique finish that adds depth and warmth to the overall finish and appearance of the statue, which depicts the beast standing on its massive hind legs with its mouth agape as it unleashes a tremendous roar.

The Triceratops Statue follows the release of the T-Rex statue, which was the premier launch of the Lost World Collection of silver statues from Silver Statues. The Triceratops was a unique species among the dinosaurs. The massive beasts were actually herbivores and had a massive skull with three horns, two of which protruded from the top of its skull while a third came from the tip of the snout.

All 8 oz Antique Finish Triceratops Silver Statues feature a stunning design from Cosmin Morar, which depicts a youthful Ceratopsia, which was the final member of her species. The Triceratops was wiped out during the extinction event known as the Cretaceous-Paleogene event.

The Stegosaurus is one member of a genus of armored dinosaurs, so named because their bodies were covered by thick skin and plates that gave it a greater degree of protection than other species against predators. The fossils of most stegosaurs date to the Late Jurassic period of time, which stretched from 155 million to 150 million years ago. The vast majority of stegosaurus remains have been found in the western United States and Portugal.

Large and heavily built, the stegosaurus was actually an herbivore and not a meat-eating predator like many of the other fearful creatures of its day. These massive beasts had rounded backs, short fore limbs, and long hind limbs that enabled them to hold their large tails higher in the air. The stegosaurus is one of the most recognizable dinosaur species because of its unique combination of vertical plates along its spine and a spiked tail.

The 8 oz Antique Finish Stegosaurus Silver Statue from Silver Statues brings this prehistoric beast to life in the form of a 5 CM tall silver statue. The details of its thick skin and armored plates are clear to the eye, and the statue is finished with Silver Statues proprietary antique polish to give the statue a proper, aged visual appearance.

The Wooly Mammoth depicted in these statues comes from a species of mammoth that existed during the Pleistocene epoch and was the last in a line of mammoth species that lived during that era which stretched back to the early Pliocene. Wooly Mammoths are related to the steppe mammoth, but diverged as a unique subspecies in East Asia beginning 400,000 years ago.

Each 8 oz Antique Finish Wooly Mammoth Silver Statue depicts the beast as it was in its day. Wooly Mammoths featured a body covered in fur that consisted of an outer covering of long guard hairs and a shorter undercoat. They had long tusks, but short tails and ears to minimize heat loss in their frigid environments. Believe it or not, isolated populations of the Wooly Mammoth actually lived until roughly 5,600 years ago on St. Paul Island in Alaska and until 4,000 years ago on Wrangel Island in the Arctic Ocean.

If the Cretaceous Period of life on Earth had a battle tank, that would have been the Ankylosaurus. The fifth prehistoric beast to feature in the Lost World Collection, the Ankylosaurus offers a 3D model of the famed “fused lizard,” a genus name given to the creatures as a result of the thick skull plates that covered its head and back to protect it from attackers. While it lacked the firepower of a modern battle tank, the Ankylosaurus wasn’t without an offensive weapon as impressive as its defensive armor.

The Ankylosaurus wielded a solid mass on its tale that could be swung with devastating effect when warding off would-be attackers. The Ankylosaurus often grew to a length of 19.7 to 26.2 feet on average and weighed as much as 8.8 short tons, or the equivalent of 17,600 pounds! The last Ankylosaurus specimens were believed to have died out between 68 and 66 million years ago in what is now western North America.

The prehistoric world was full of sights, sounds, and creatures that the modern human mind simply cannot fathom. Though we may not be able to imagine a living creature of such size, statues such as the Brachiosaurus Silver Statue in the Lost World Collection can remind us that we would have been much farther down the food chain in the prehistoric world. The 3D rendering of the Brachiosaurus captures the tall, stretched beast in the same beautiful antique finish as all other releases.

The Brachiosaurus is one of the oldest specimens in this collection that lived roughly 154 million to 153 million years ago during the Late Jurassic Period. The average Brachiosaurus stood around 30 feet in height, but measured from the top of its very long neck to the tip of its tail, the creatures were the equivalent of a 6-story building at nearly 69 feet for an average maximum range. More impressively, these herbivores weighed as much as 64 short tons, or 128,000 pounds!

The images on Lost World Silver Statues have gotten more complex with the release of two recent designs in this collection. The first of those is the Velociraptor Silver Statue. Featuring all of the same mintage, finish, and packaging details as its predecessors, the Velociraptor design is unique in its inclusion of a base “setting” that shows the raptor in its native environment rather than offering a standalone statue.

In particular, the design of these 8 oz Antique Finish Velociraptor Silver Statues captures an image of the raptor as one was actually discovered during a paleontological expedition. This creature is shown in this design standing over its kill with a piece of raw flesh dangling from its razor-sharp teeth. The pose of the raptor comes from the position in which a raptor was uncovered in a dig that unearthed one of the creature’s skeletal remains.

The Velociraptor is a theropod that was believed to have lived between 75 and 71 million years ago during the late-Cretaceous Period. Two species of the creature are recognized by scientists, with one discovered in Mongolia and the other identified from remains found in Inner Mongolia, China. The name for the Velociraptor translates from Latin as “swift seizer,” a fitting name for a creature that could easily reach speeds of 24 MPH while chasing down its prey.

Another recent release in the Lost World Collection of silver statues is the Dilophosaurus. This design, like the Velociraptor, offers a setting for the beast rather than showing a standalone image of the dinosaur. In this design, the Dilophosaurus is shown standing on its hind legs with its cowl flapped open and its mouth open as it sounds a warning to its prey.

The Dilophosaurus is a unique dinosaur in that it has been depicted in pop-culture, most notably the film Jurassic Park, in a manner that doesn’t seem to fit its paleontological record. The creatures in the film were small figures with a docile initial appearance, but the ability to both open its cowl as a sign of aggression and spit a blinding, poisonous serum at its victims. However, scientists suggest that the Dilophosaurus was actually much larger in real life. In fact, some say it was as large as 23 feet in length and weighed upwards of 880 lbs. Further, it is believed by many scientists that the cowl was not retractable, and was in fact a permanent fixture of its body in an open position. There are also those who say it did not possess poisonous spit. Whatever the case, this design is powerful and frightening.

Silver Statues brings the age-old art of sculpting to life in a way that other modern mints and refineries cannot accomplish. These second-generation mint masters are responsible for producing not only the four statues of the Lost World Collection, but countless other new and growing silver statue programs.

If you have any inquiries from the JM Bullion customer service team, please feel free to reach out to us with those questions. You can reach us on the phone at 800-276-6508, chat with us live online, or connect with us through our email address. You can find answers to common Payment Methods questions online at any time, but if you still have questions, please don’t hesitate to contact our customer service team directly.