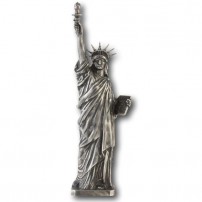 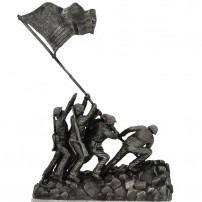 Silver statues are growing in popularity, variety, and prominence within the precious metals industry. There are numerous collections available from different mints and refineries that capture images of historical figures, fantastical worlds, and even real-world landmarks. Among the options available those looking to buy silver today are Landmark Silver Statues.

As Merriam-Webster notes, a landmark is “an object that marks the boundary of land.” However, there are various other definitions such as a “conspicuous object on land that marks locality,” “an anatomical structure used as a point of orientation in location other structures,” or “a structure (such as a building) of unusual historical and usually aesthetic interest.” It is this latter definition that accurately categorizes a collection of beautiful silver statues known as Landmark Silver Statues. Check out the variety of silver in this collection from JM Bullion.

Only one woman has stood present to watch some of the most momentous occasions in American history. She has greeted millions arriving on these shores in search of a better future; watched the nation celebrate the end of World War II, and looked on in horror on the worst day in the nation’s history on 9/11.

Each of the 5 oz Antique Finish Lady Liberty Silver Statues beautifully replicates the appearance of the Statue of Liberty in a four-inch tall sculpture that features .925 fine silver content. The antique finish is proprietary to Silver Statues, and provides subtle depth of design and warmth.

Although Iwo Jima is significant as a moment in time during world history, the island itself stands as a lasting landmark to the brutality and hard-fought gains of US forces during World War II. What makes this a landmark is the symbolism of the American flag flying over the summit of Mount Suribachi during the long and bloody battle for the island of Iwo Jima.

The Battle of Iwo Jima raged from 19 February 1945 until 26 March 1945, and claimed the lives of more than 6,800 American Marines and soldiers, as well as upwards of 21,000 Japanese imperial forces. After a five-week battle for the small island, US military forces led by the United States Marine Corps eventually captured the island from the Japanese. The most iconic moment from the bloody battle, one which stands as the bloodiest of the War in the Pacific, was when a group of US Marines raised the American flag atop the island’s highest point.

Each 1 Kilo Antique Finish Iwo Jima Silver Statue depicts the moment when six US Marines raised an American flag on top of Mount Suribachi, the highest point on the island in a symbolic gesture of American victory. It would be several more weeks until all fighting ceased on the island.

Silver Statues believes in bringing the oldest and most beautiful coin or round designs, as well as other inspiration figures from around the world to life in a new way. The 2nd generation mint masters believe in entrusting these designs to true artisans; sculptors who can bring the designs to life with brilliant, 3D statues.

JM Bullion customer service is available to assist you with any questions about this range of silver statues at 800-276-6508. We are also available to you online through our live chat and email address features. We encourage all visitors to read our Payment Methods page for quick-and-easy answers about completing payments when buying online. You can always contact our customer service team with any follow-up questions regarding payment options.