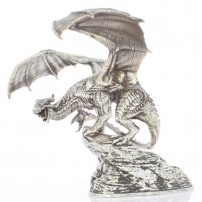 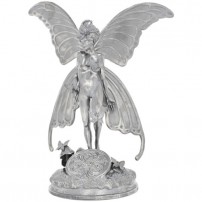 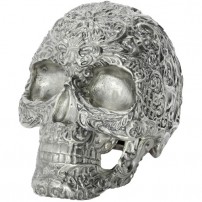 The human mind is capable of many great achievements, from developing cures for the most devastating diseases to unlocking the mysteries of the universe. One of the greatest assets of the human mind is its capacity for imagination. Through human creation, stories have been written and told of fantastical worlds filled with creatures the likes of which no human being has ever actually seen. The Fairies and Fantasy Silver Statues from Heads or Tales Coin Company highlight some of the immense power for imagination in the human mind.

Together with other silver bullion statue collections, the Fairies and Fantasies Collection brings impressive designs together with the highest quality in casting and refining to create heirloom-quality silver products for investors and collectors alike. Browse through the collection of Fairies and Fantasy Silver Statues currently available to purchase from JM Bullion.

Common Features in the Collection

Though their designs differ, there are common features of each silver statue in the Fairies and Fantasy Silver Collection from HotCo. The production of each statues consists of a process that involves combining a blend of .999 pure silver, copper, nickel, and other metals and melting them at a temperature in excess of 1,000 degrees Celsius. The result is a beautiful silver statue containing precisely .925 silver content.

Each design has a casting maximum of 1,000 statues. When each has been created, the statues are laser engraved on the base with a unique production number that matches the accompanying serial number on the Certificate of Authenticity from HotCo. Lastly, all statues in the Fairies and Fantasy Collection feature a proprietary antique polish that lends the patina of age and a beautiful overall appearance to each statue.

The release of Coco the Dragon in the Fairies and Fantasy Collection from HotCo featured not one, but two different options for those interested in adoring their desk or a shelf in their home with this fearsome winged beast. The Coco the Dragon silver statue was designed and produced in an 8 oz weight and a massive 1 Kilo weight. Both statues featured the same design, with the dimensions and weight proving the only difference in these two impressive statues.

The dragon is a legendary creature that is typically featured with scales all over its body and said to spew fire. In European history, the dragon was a folk tradition of a reptilian creature with average animal intelligence with four legs and a separate set of wings. In Chinese, Japanese, and other East Asian cultures, the dragon was more of a serpentine creature with above-average intelligence and only four legs, no wings.

Both the 8 oz and 1 Kilo Antique Finish Coco the Dragon Silver Statue feature the image of Coco sitting perched atop a rocky crag with great detail in the 3D design and finish of the statue. Her massive muscles seem to quiver as the stands ready atop the rocks, able to pounce it would seem at any moment. The design of the dragon includes pointed horns, scaled body, and razor sharp talons. You’ll also notice a forked tail on the massive beast.

The Coco the Dragon Silver Statues were designed and imagined by Jesse Sandifer. Sandifer is a 3D digital master sculptor, and developed this first statue in the Dragon Collection exclusively for Heads or Tales Coin Company.

If you thought Coco the Dragon was imposing, wait until you lay your eyes on Brutus. Available in an 8 oz weight with a 1 Kilo option planned for release as well, Brutus is the stuff of nightmares. While dragons may be mythological creatures from ancient times, they continue to fascinate children and adults alike despite their imposing figures. Mythical or not, there are real-world dragons on planet Earth, such as the Komodo Dragon, but they pale in comparison to the tales of ancient dragons.

The 8 oz Brutus Silver Statue depicts the fearsome and intimidating image of Brutus the Dragon. In the depiction, Brutus is shown perched on all fours with his knuckles down and his teeth visible in the front as he snarls at his foes. His wings are stretched backward in a position that suggests he’s ready to take flight and pounce on his enemies at a moment’s notice.

Like its other Fairies and Fantasies Collection partners, Godric the Gargoyle brings to life a creature many feared in the ancient world, though was never proven to actually exist. Gargoyles have a distinct history in the background of human society. The term originated from the French word gargouille, when translates to mean “throat” or what is otherwise known as “gullet.” Its use in architecture, often to help serve as an ornamental waterspout that removed water from the roofs of buildings.

However, the concept of a gargoyle was to appear grotesque in nature and frighten off those who would harm a building or its occupants. They were often used on churches as well to help ward off any evil or other harmful spirits.

In the primary design of the 13 oz Godric the Gargoyle Silver Statue you’ll find the massive, frightening form of the beast itself sitting perched atop the safe. The beast has a powerful form, capable of fighting off any evil spirits, and a fearsome look on its face that gives it the power to also scare off any people who would do harm.

Each of the Godric the Gargoyle Silver Statues available features original artwork created by award-winning character artists, and master sculptor, Rafael Fernandez. There are incredible details used in this statue that include an oversized old-fashioned safe that includes texture to the handles, hinges, and rivets.

Turning away from the creatures that stalk you in your dreams, you’ll find plenty of fairies available in the Fairies and Fantasy Collection as well. Among them is Gwen the Fairy. The Gwen the Good Luck Fairy design used in this statue is inspired by Tom Grindberg’s Gwen silver coin, which first brought the image of Gwen to the numismatic world. For this collection, the Gwen Statue was imagined and designed by Mario Taboada Duro, a master sculptor of 3D silver statues and other products.

The primary design of the 7 oz Antique Finish Gwen the Good Luck Fairy Silver Statue is intricately detailed and features the image of Gwen. The fairy is depicted with no clothing on, and tiny butterflies covering her body in various areas. She is shown standing on a base of overgrown fantastical mushrooms, and has large wings on the back of her figure.

Arguably one of the most popular silver designs in the industry right now is that of Ariana. Known as the Keeper of the Scales, Ariana is said to come from the land of Kumush where her father was a silversmith. The Sehrli people were peaceful fairies who worked in nearby silver mines, and her father was more than just a silversmith, but a keeper of the true weight for silver.

More recently, Ariana has become closely associated with the Silverbug community. Her image debuted in May 2014 as a celebration of the online Reddit community of Silverbugs welcoming their 5,000th member. With the popularity of silver in general and the success of the Ariana Silverbug Silver Round specifically, the Silverbug community has now doubled to include more than 10,000 members.

These 5 oz Antique Finish Ariana Silver Statues feature a design from Caleb Nefzen in which Ariana is depicted crouched down with her wings extend to their fullest behind her, while her right hand is held out clutching scales holding silver. The base for her statue mimics the appearance of the silver rounds that made her figure so popular in the first place!

The Frank Frazetta Legacy Collection comes to life in a brand-new way in a beautiful chess set. Many of his greatest works are reimagined as the iconic pieces of a chess set. Each statue in the six-design release features an antique finish, which is a proprietary polish of HotCo applied to silver statues to provide age and a beautiful patina to the overall appearance. The casting of each statue is limited, and there are three different sizes available.

The Atlantis Silver Statue represents the pawn, and as the smallest piece on the chess board has a 4 oz weight. The Huntress (knight), Death Dealer (bishop), Egyptian Queen (Queen) and Barbarian (King) all have a 6 oz weight, while the Silver Warrior (Rook) comes in at 8 oz of actual silver content in total.

All of the Antique Finish Frazetta Silver Statues in the chess collection ship to you inside of a protective box, and includes a numbered Certificate of Authenticity that aligns with the number applied to the bottom of these statues. A full set in the collection would include 168 ounces of pure silver and include 16 Atlantis, 4 Silver Warrior, 4 Death Dealer, 4 Huntress, 2 Egyptian Queen, and 2 Barbarian pieces.

About Heads or Tales Coin Company

Heads or Tales Coin Company brings the age-old art of sculpting to life in a way that other modern mints and refineries cannot accomplish. These second generation mint masters are responsible for producing countless silver statue series, including Coins of the World, Lost World Collection, and these Fairies and Fantasy Silver Statues.

Purchase Your Fairies and Fantasy Silver Statues from JM Bullion

In addition to flexible payment methods, JM Bullion offers free standard shipping and insurance on all purchases over $199. Your silver statues will be packaged in discreet boxes to protect the identity of the products within, and delivered to you via the US Postal Service or UPS. For those interested, expedited shipping is available for an additional fee. If your packages are lost or damaged during shipping, we’ll find you a replacement product or refund your purchase price.

If you have any questions about buying silver statues, JM Bullion payment methods, or our shipping policies, please feel free to reach out to us. Our associates are available at 800-276-6508, online using our live web chat, and via email. Don’t forget to visit our homepage and search for the latest spot price of silver before you buy!