Coins of the World Statues 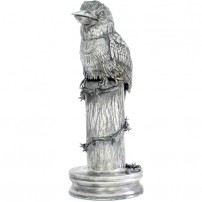 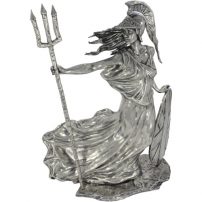 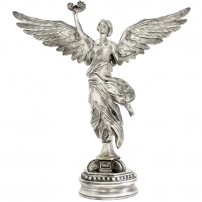 Buying silver coins and bars is all well and good if you want to protect your wealth, but what about finding truly unique collectible items? Silver Statues produces some of the finest silver precious metal products on the market today, but its best work doesn’t come in the form of coins. That’s not to say its coins and rounds are bad, but rather that its impressive lineup of silver statues is even better.

Silver Statues offers the most diverse array of silver statues you’ll find anywhere on the precious metals market, and JM Bullion is proud to carry some of the latest and greatest designs to emerge from this refinery. Among them is the Coins of the World Series, which celebrates major silver bullion coin programs from around the globe by reimagining those designs in a manner never seen before. Explore the Coins of the World collection below and learn more about the silver statues from this series that are available through JM Bullion.

About Coins of the World

Developed by Silver Statues, the Coins of the World Statues will celebrate five different coin programs from private and sovereign mints alike. The first release in the series highlights the single most popular coin available in the market today. The American Silver Eagle debuts as the first of these statues, weighing in at an impressive 20 Troy oz of .925 pure silver.

Subsequent releases in the series include the Ariana Silverbug Round, the Mexican Libertad, the Australian Kookaburra, and the Chinese Panda. Each release in the series includes imagery developed by a different designer, and the statues will feature a purity level of .925 silver. Weights will vary by design, and the mintage for each statue is set to be limited to just 1,000 statues in total. All of the silver statues in the series have laser-etched serial numbers on the base and a matching Certificate of Authenticity that is individually serialized.

As the first statue released in the Coins of the World Statue series from Silver Statues, the American Silver Eagle takes center stage with a breath-taking rendition of America’s greatest symbols of the freedom and democracy coming to life on a 9.8 mm tall, solid silver statue. Designed by Joanna Zawada, the 20 oz Antique Finish American Silver Eagle Statue leads the way in the Coins of the World Series!

Each of these 20 oz Antique American Silver Eagle Silver Statues features an antique finish, which brings depth and warmth to the overall finish of the statue. Antiquing is a modern chemical treatment that gives any silver product the appearance of age and history, without exposing it to actual use or decades of handling.

As depicted in this breathtaking, heirloom-quality statue, the American bald eagle is depicted sitting perched on a pedestal with its wings folded at its side, and its right claw lifted up on top of (and holding) the heraldic shield of the United States of America. The eagle’s feathers are captured in intricate detail, and its steely glaze peers out from behind the shield as it stands stoic and on-guard for the nation.

The Mexican Libertad coin series from the Mexican Mint is arguably one of the most visible coin programs in the world, and a top seller in North America. Available in silver and gold, this official bullion coin of Mexico is renowned for its beautiful designs and low mintage. As the third release in the Coins of the World collection, the Silver Libertad focuses on the image of the Greek Goddess of Victory designed by Cosmin Morar for this series.

Without question, the Australian Silver Kookaburra coin is one of the most popular coins in the world today. The first major silver bullion program from the Perth Mint in Australia, this coin has been available since 1990 and features as the fourth silver statue in the Coins of the World collection from Silver Statues. The 20 oz Antique Finish Australian Kookaburra Silver Statue was designed by Cosmin Morar, and shares its main highlights (number of castings, silver purity, and serial numbers) with other releases in the collection.

The Australian Silver Kookaburra coin, it debuted from Australia’s famed Perth Mint in 1990 as an annual release coin, and has quickly become one of the world’s most popular investment and collection options. The Perth Mint alters the image of the kookaburra featured on the reverse side every year. To this point in time, there are 26 different designs of the largest member of the kingfisher species found in the Australian Kookaburra program.

In this 3D rendering from Cosmin Morar, the 20 oz Antique Finish Australian Kookaburra Silver Statue features the bird as it sits atop the stump of a wooden post, with barbed wire wrapped around the base. The image is reminiscent of one of the recent designs used on the actual coin program from the Perth Mint itself.

Morar is the designer behind the Australian Kookaburra Silver Statue and the Mexican Libertad Silver Statue in this collection. He holds a Master’s Degree in Sculpture from the University of Unate Bucharest, and has designed numerous other silver statues for Silver Statues collections.

Dating back to the Roman Empire, Britannia has been a figure that has represented the people of Britain. The name Britannia comes from the Latin term that the Romans used to refer to the province established in the British Isles after the Empire invaded. During the reign of Emperor Hadrian in the 1st century CE, the first-ever coin with an effigy of Britannia was released in the province. Britannia would go on to feature on various coins during the history of the English kingdoms. Since the reign of King Charles II in the late-17th century, Britannia has been a regular fixture on coins from the United Kingdom since the Acts of Union in 1707.

In the 30 oz Antique Finish Britannia Silver Statue, her figure as inspired by Philip Nathan’s modern bullion coin design is featured in stunning relief. This powerful depiction of the female personification of Britain captures Britannia standing tall against the mighty wind gusts of the English Channel. On a small crop of land, she stands ready to defend the isles against any invader. Wearing a Corinthian helmet, she holds out a trident in her right hand and clutches a shield in the other hand that is emblazoned with the Union Jack flag of the United Kingdom.

Get to Know Silver Statues

Silver Statues brings the age-old art of sculpting to life in a way that other modern mints and refineries cannot accomplish. These second generation mint masters are producing a total of six incredible statues in the Coins of the World collection. More information on future silver statue designs will be available as those products are released for sale.

Purchase Your Coins of the World Statues from JM Bullion

Please don’t hesitate to contact JM Bullion with any questions that you have about silver statues in the Coins of the World Collection. Our team is available at 800-276-6508, online using our live chat, and via our email address. We encourage you to read our Payment Methods FAQ if you have any payment-related questions, but do feel free to contact us afterward with any lingering questions.