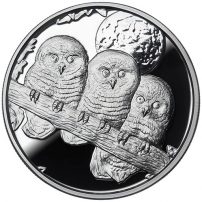 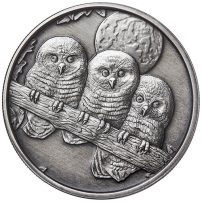 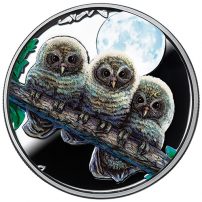 Seek Wisdom with the Power of Three Design

As the Lisa Parker Collection from the Anonymous Mint winds toward its conclusion, the fifth and penultimate design brings yet another sense of mysticism to the collection with the Power of Three release. As you continue to buy silver from this impressive silver round collection, you’ll find each design brings its own distinctive appeal. Learn more about the Power of Three artwork and the available silver rounds with the fifth release.

The Power of Three

On the obverse side of the Lisa Parker Collection Power of Three Silver Rounds, you’ll find three owls seated on the branch of a tree. Gazing up at the sky, the leaves separate and the view opens toward the moon in the night’s sky. As you gaze at this scene, you’ll see that the three owls are staring right back at you. As with other releases in the series, Wild One is depicted on the reverse of the rounds. Wild One features a wolf’s head in front-facing relief with a five-pointed star and barren trees behind its head.

There are few animals with a greater connection to mythology. Human society’s connection to the owl goes back to the prehistoric era as the owl is one of the only animals ever found in prehistoric cave drawings. In Roman and Greek mythology, the owl had very different meanings. In Greek mythology, the goddess of wisdom, Athena, chose the owl as her companion after tiring of the crow’s antics. In general, the Greeks viewed owls as a source of wisdom and even believed the owl delivered prophecies of good fortune. The Romans, meanwhile, viewed the owl as an omen of death and destruction. With three owls in the Power of Three design, it could be possible that all three of these beliefs are represented in the artwork.

Each of the Lisa Parker Collection Power of Three Silver Rounds ships with a protective plastic capsule to secure the specimen. The rounds in this series have unique serial numbers etched onto the edge of the round and a Certificate of Authenticity is available for each round. The Power of Three release is available in 1 oz silver and 5 oz silver rounds, with proof, antique, and colorized proof versions.

The proof silver rounds have simple frosted design elements and mirrored background fields. An antique polish applied to that version of the round design delivers a brushed, matte appearance to the finish. Colorized proof silver rounds bring Lisa Parker’s true colors to the artwork. The three owls have white feathers with hints of black and brown in the tufts of their feathers. Each owl has piercing black eyes and a short, sharp beak. While much of the background field retains its mirrored silver finish, the moon in the sky behind the owls has a brilliant combination of white and blue tones.

Harness the Power of Three with JM Bullion

All silver round designs in the Lisa Parker Collection are released exclusively by the Anonymous Mint with JM Bullion. We’re the only place you’ll find the Lisa Parker designs as each is released. If you have any questions, please feel free to contact JM Bullion at 800-276-6508. You can also connect with us live online through our web chat or send us an email with your inquiries.