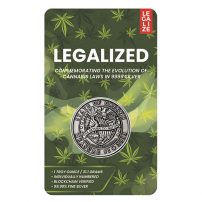 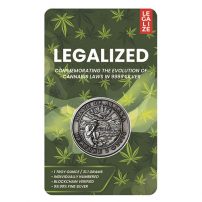 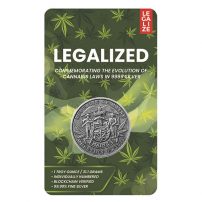 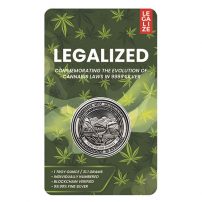 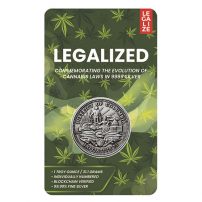 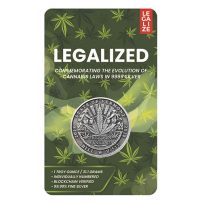 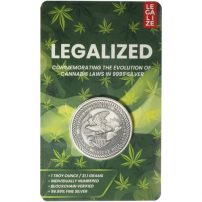 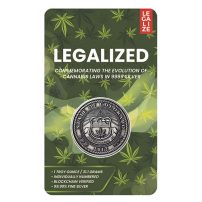 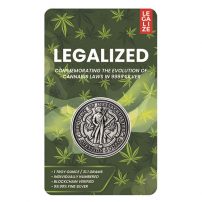 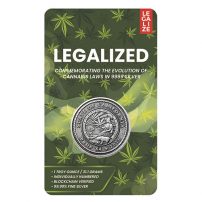 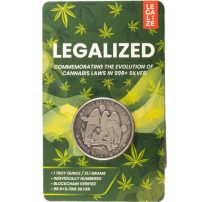 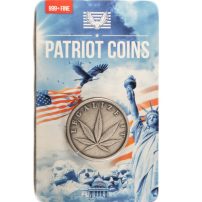 1 oz Antique Silver Legalize It Round (New w/ CoA)
As Low As:
In Stock 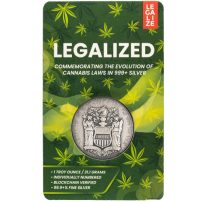 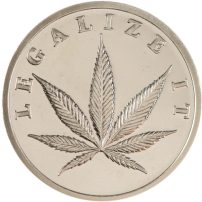 1 oz Silver Legalize It Round (New)
As Low As:
Out of Stock 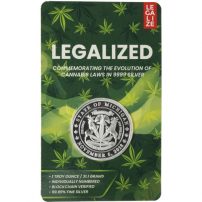 1 oz Proof Legalized Collection Michigan Silver Round (New w/ CoA)
As Low As:
Out of Stock 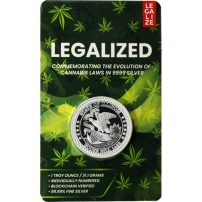 1 oz Proof Legalized Collection Illinois Silver Round New w/ CoA
As Low As:
Out of Stock 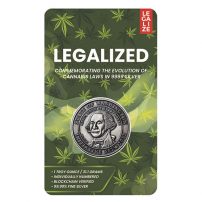 1 oz Antique Legalized Collection Washington Silver Round (New w/ CoA)
As Low As:
Out of Stock 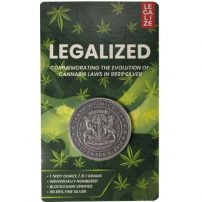 1 oz Antique Legalized Collection Michigan Silver Round (New w/ CoA)
As Low As:
Out of Stock

The Legalized Collection from Blockchain Mint

The Legalized Collection is a series of silver rounds offered by the Blockchain Mint and each issue represents one of the US states and nations around the world that have taken the step of legalizing recreational cannabis use. Learn all about this ever-growing collection now!

About the Legalized Collection

The Legalized Collection from Blockchain Mint is designed to represent each individual US state and sovereign nation featured in the series with its own, unique design. In the case of US states or territories, the reverse design field offers a version of the official seal for that jurisdiction. However, each seal has been tweaked to include elements noting the adoption of legal recreational cannabis. In the case of states and territories that use legislation to complete the change, that legislation and the date of its approval are inscribed along with the altered seal.

Each of the 1 oz silver rounds in this collection represents a US state or territory that has legalized recreational cannabis, while the 5 oz silver rounds are reserved for sovereign nations that make the move. Both options come with proof and antique versions of each design. The proof rounds have frosted design elements with mirrored background fields, while the antique versions feature a brushed, matte appearance to the visual fields.

The Blockchain MInt has limited mintage figures for each design split across the proof and antique versions. All 1 oz state silver rounds have a limited mintage of 500 rounds each for the proof and antique in a given design, totaling 1,000 rounds in all for each state. The nations have a total mintage of 250 rounds per design for a total of 500 for that national design. All individual rounds are housed inside of blisterproof cards that include certificate information.

The Blockchain Mint Legalized Collection launched with designs for nine US states and Washington DC, all of the jurisdictions that had legalized recreational cannabis at the time the collection was introduced. Again, each of these states and the District of Columbia have their own unique designs in proof and antique versions. The available US states to date include:

As mentioned earlier, the Legalized Collection is an ever-growing series. As more US states move to legalize recreational cannabis, Blockchain Mint will add new designs in their honor to the collection. Right now, a design is in the works for the state of Michigan. Voters in that state passed Proposal 1 during the 2018 midterm elections, but the measure goes into effect in stages. First up, Michigan residents can possess and smoke marijuana, but cannot grow it or sell it legally just yet. Michigan is the first state in the Midwest to legalize recreational cannabis.

To date, Blockchain Mint’s selection of 5 oz silver rounds in this series includes only Uruguay and Canada. Uruguay was the first nation to legalize the recreational use of cannabis on a national scale, and was swiftly followed by Canada. Since these two nations took that step, several other nations have started to move in the same direction by legalizing recreational cannabis in various forms. The list of nations currently working on legislation or working on ballot measures includes Luxembourg, New Zealand, Israel, Thailand, South Korea, and Mexico.

Brief History of Cannabis in the United States

Massachusetts was the first state in the United States to take any sort of action against cannabis use. The state made cannabis use illegal in 1911. California was the first state to legalize the use of cannabis for medicinal purposes in 1996, and that was followed by Alaska and Oregon in 1996. Maine became the fourth state to do so in 1999. Today, a total of 33 US states allow for the medicinal use of cannabis to treat the symptoms of various forms of cancer and provide pain relief for a variety of other diseases. Oregon was, notably, the first state to take any action to legalize cannabis for recreational purposes when it decriminalized the possession of small amounts of marijuana in 1973. With Michigan and Illinois joining the ranks of states legalizing recreational use, there are now 11 US states that allow for recreational cannabis, as well as Washington DC.

As each new round in the Legalized Collection is released, you can expect to find those products for sale with JM Bullion. If you have any questions about buying silver, please feel free to reach out to us at 800-276-6508. You can also connect with us live online through our web chat or simply send us an email with your inquiries.