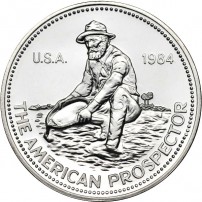 1 oz Engelhard Prospector Silver Round
As Low As:
Out of Stock 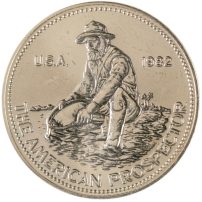 1982 1 oz Engelhard Prospector Silver Round (\E\ Logo Reverse)
As Low As:
Out of Stock 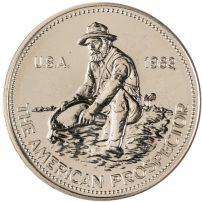 1983 1 oz Engelhard Prospector Silver Round (E Logo Reverse)
As Low As:
Out of Stock

Engelhard was a US-based company that had been a focal point of the precious metals industry since it was founded over a century ago. More recently, however, Engelhard was bought out and acquired by a German chemicals company known as BASF. They are most known for their production of silver bars across a wide variety of sizes and weights, but like many other companies who rose to fame via their production of silver bars, Engelhard also produced silver rounds. Even though Engelhard does not exist anymore, their silver bullion products are still sought after more so than most other silver bullion from American-based companies.

Every Engelhard round has both the Engelhard name and mintmark present on the front, coupled with the weight and .999 purity indication.

Engelhard was founded in 1902 by Charles Engelhard in Newark, New Jersey. Initially, like many other precious metals producers, Engelhard was a company in the business of smelting and refining platinum for commercial use. Within what seems like the blink of an eye, Engelhard grew to being the world's largest refiner and fabricator of precious metals, including gold, silver, and platinum. Throughout the duration of the 20th century, Engelhard grew and acquired new companies in an effort to expand its number of industries reached and its their earnings.

Since Engelhard went out of business, their bars have become understandably more difficult to find, despite the demand for them remaining unchanged and even growing. More and more often investors are witnessing precious metals retailers run out of their Engelhard silver bar stock.

Despite Engelhard being able to produce silver bullion across a broad selection of sizes, they are most well-known for their production of 1 oz silver rounds. One ounce is more or less the standard size for a silver round, and what you will find is that if a company produces bars like Engelhard does, they will often produce silver rounds, as well.

The front side of Engelhard silver rounds features the Engelhard mintmark, as well as the one troy ounce and .999 purity indication. The reverse side of some Engelhard rounds is unique in that it features the image of an American prospector searching for gold (or silver). Also present on the reverse side of the coin is the year which the round was minted, something that most other silver rounds are missing.