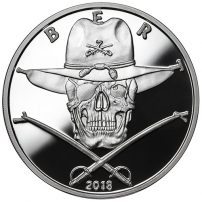 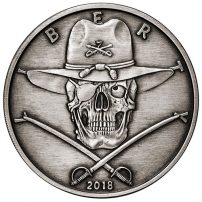 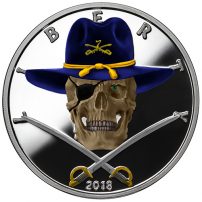 In the fourth release of the American Western Skulls Collection, the first member of the US Army is featured in a design that depicts perhaps the most well-known units of the army to serve in the Wild West. Prior to its westward expansion, the fledgling United States had little need for horse-mounted units. However, with wider expanses to cover and more ground to defend. The US Cavalryman features on this brilliant design in the American Western Skulls Collection.

Like the other designs in the American Western Skulls Collection, the Cavalryman is depicted as a skull only. This lifeless former warrior wears his US Cavalry hat with a patch over his right eye and his weapon of choice from horseback. The design includes the typical engravings of “Liberty” and the year of release, which is “2018” for the Cavalryman design. Included on this side are the long swords used by cavalry forces. A cavalry soldier typically wielded a long, curved sword that was sharpened on one edge only. The blunt, thicker back side of the blade gave the sword greater strength and ensured that as cavalry sliced through opponents the blade would maintain its strength and not break.

The cavalry hat worn by the skeletal figure in the Cavalryman design of the American Western Skulls Collection is a replica of those worn by actual US Cavalry soldiers. The hat features a ribbon tied around the base just above the brim and has a pair of crossed swords as the primary emblem.

History of US Cavalry

Prior to the era of the Wild West, the first mounted forces of the United States were the Continental Dragoons in the Revolutionary War. Inspired by the King’s Dragoons of the British Royal Army, these forces were intended to be lightly armed by prepared for quick, mobile strikes in far-flung locations. As the United States pushed westward beyond its original boundaries along the Appalachian Mountains, and later the Mississippi River, cavalry forces would become critical to the nation’s success.

US Cavalry forces were stationed at outposts and forts throughout the Midwest and Wild West. As the US Army became further stretched, cavalry made it easier for the army to maintain supply lines, lines of communication, and respond faster to aggression from outlaws, Mexican bandits, and restless indigenous tribes. Cavalry forces would fulfill many different roles in the westward push as a result, including mail delivery, communication back to main commanders in the east, and even assisting local police and lawmen.

Options in the Cavalryman Silver Round Issue

The Cavalryman silver rounds from Osborne Mint feature six options. There are 1 oz silver rounds with proof, antique, and colorized options, as well as 5 oz silver rounds in those same three versions. The colorized versions of the Cavalryman design bring a blast of US Army blue and gold to the hat worn by the cavalry soldier. His sword blades glint a beautiful silver color while the handles are a sharp gold. Each round comes with a protective capsule, Certificate of Authenticity, and an edge-lettered serial number.

JM Bullion has all versions of the Cavalryman design available to purchase online. If you have any questions about these rounds, please don’t hesitate to contact JM Bullion. Our customer service team is available at 800-276-6508, online using our live chat service, and via our email address.