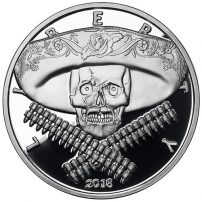 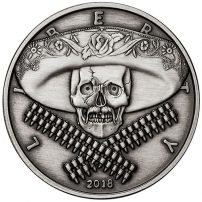 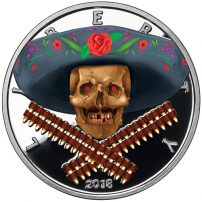 The American Western Skulls Collection from Osborne Mint brought a taste of the Wild West Era to the modern world with six beautiful designs. The collection focuses on six different characters that helped shape the reality and cultural lore of America’s expansion into the west. From lawless gunslingers to faithful sheriffs trying to uphold the law in a brutal wilderness, each of the designs in this collection has a deathly twist. The designs of the collection focus on the skeletal remains of each figure as its role in the Wild West comes back to haunt the modern world.

For the sixth and final design in the American Western Skulls Collection, one of the often overlooked figures from the Wild West Era appears. In the Mexican Bandito design, you’ll find a jovial outlaw with a grin that almost suggests he’s a peaceful fellow, even though he’s well-armed and prepared for a fight. On the obverse of the Mexican Bandito Silver Rounds is the skeletal figure of a bandito, the name given to Mexican outlaws who would raid back and forth across the US-Mexico border.

This bandito wears a large sombrero on his head with ornate floral patterns in the design. He has an inquisitive look on his face as he stares at you, with a mustache framing the smile on his face. Above his head is the engraving of “Liberty,” while below you’ll notice the date of issue as “2018.” All of the designs released in this collection feature crossed weapons at the bottom of the obverse which are reflective of the individual character. In this case, the Mexican Bandito includes two bandoliers full of ammunition for his guns.

The term bandito derives from the Spanish term “bandido,” and referred to the outlaw characters who raided towns and villages throughout northern Mexico and the southern United States. In American media, the Mexican Bandito from this era was often stereotypically portrayed. Film and television representing the era depicted banditos as almost goofball criminals. The characters had thick mustaches, choppy Mexican accents to their English, and were almost always dressed in oversized sombreros wearing bandoliers across their chests.

The reality of banditos was much different than their depiction in popular culture. Banditos, though certainly capable of committing evil acts including murder and robbery, were also capable of good deeds. Much like American gunslingers, banditos were also known to use their skills with a gun to fight for good. In fact, some banditos in Mexico were associated with various movements to ouster corrupt governments on behalf of the good citizens of Mexico.

As with the other silver rounds for sale in the American Western Skulls Collection, the Mexican Bandito design is available in 1 oz silver with proof, antique, and colorized versions. The design is also available to purchase as a 5 oz silver round with proof, antique, and a new colorized option. The colorized versions are the most beautiful in the collection, bringing bright floral hues to the design on the sombrero of the bandito. The proof rounds have typical combinations of frosted design elements and mirrored backgrounds, while the polish on the antique rounds creates heirloom quality and gives each piece the appearance of old-world coinage.

If you’re looking to buy silver in this collection, there’s little time to waste. Act now to ensure you get your round, because the mintage figures for each of the individual designs are low:

Whether you’re wrapping up your American Western Skulls Collection with the Mexican Bandito, or just getting started, the place to shop is JM Bullion. Our customer service associates can help answer your questions at 800-276-6508, online using our live chat, or via our email address.