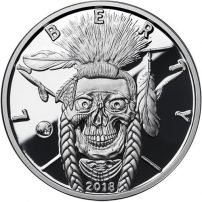 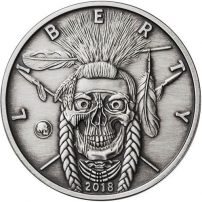 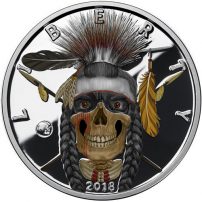 The American Western Skulls Collection of silver rounds debuted in 2017. The series is intended to shed light on the reality of life in the American Wild West through exciting and distinctive silver designs. The first of these was the Indian Chief and it was followed by countless other designs featuring characters known to anyone who’s seen films about the West or read any number of fictionalized novels about the era. From the Indian Brave to the US Cavalryman, these designs are one of a kind. Now, the series continues beyond its original six with new designs in late 2018 and into 2019! The second of these new designs is the Indian Warrior.

The second design of the new release schedule and the eighth overall, the new Indian Warrior Silver Round features the second design of a fighter from the ranks of the indigenous people struggling to preserve their land and culture amidst the onslaught of American and European settlers flowing into the Wild West. In this new design, you’ll find the image of an Indian Warrior wearing face paint with an arrow woven through his spiked hair on top and braided hair down to his shoulders on either side of his skull. The crossed weapons representing the figure in this design are spears.

So, what’s the difference between an Indian Warrior and the Indian Brave design already featured in the series? Well, the term brave was often applied to the best of a tribe’s fighters. These figures were skilled hunters and trackers, and often displayed the greatest prowess and bravery leading the tribe in battles against rival tribes, settlers, and even the US Army. When push came to shove, all of a tribe’s fighters were considered warriors who took up arms to help protect the people, their land, and their culture.

In late 2018, a sixth option was introduced in the series for the American Western Skulls Collection that continues with each design release now available. The series originally included 1 oz silver round and 5 oz silver rounds with proof, antique, and colorized options in the former weight, and only the proof and antique options for the latter weight. A 5 oz colorized proof was introduced for all original designs and debuts with each of the new designs upcoming.

The American Western Skulls Indian Warrior Silver Rounds feature both weights and all six options with the following mintage figures:

The proof rounds in the series have contrasting frosted design elements and mirrored background fields. Antique rounds have a proprietary polish that lends an ancient appearance to the silver rounds. Proof colorized silver rounds feature a layer of colorized lacquer that is limited to the obverse and focuses largely on the war paint the warrior wears on his face, including red, white, and black colorization.

The full range of American Western Skulls Collection rounds features in the JM Bullion catalog. You now have the chance to add to your collection with the purchase of the Indian Warrior design. You can call JM Bullion customer service with questions at 800-276-6508, chat with us live online, or simply send us an email with your inquiries.