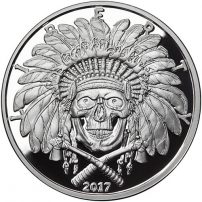 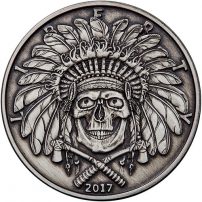 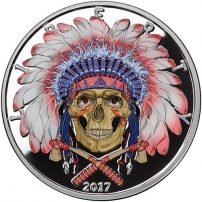 As American and European settlers moved out of the original boundaries of the United States and began crossing the Mississippi River in their constant westward move, these settlers came face to face with indigenous tribes who had inhabited the land for hundreds or even thousands of years. The Indian Chiefs leading these tribes had the final say for their people on interactions with settlers. Would they work together or fight back against aggression?

The Chief Leads the Way

In the Indian Chief design, the American Western Skulls Collection focuses on one of the most prominent figures of the Wild West. Tribal leaders and councils of elders often grappled with how to deal with the encroaching American and European settlers. When necessary, most turned to warfare to protect their land and people. The Indian Chief round depicts a skeletal figure with a full headdress of feathers and war paint on his skeletal cheeks. Crossed below the Indian Chief is a pair of tomahawks. Engravings on these rounds include “Liberty” and the year of issue for this silver round design.

Numerous tribes fought back to retain control of their lands and keep their people free from the attacks or manipulation of settlers. However, even those who aren’t scholars of the Wild West are familiar with names like Geronimo, Sitting Bull, and Crazy Horse. Geronimo was one of the few to spend most of his life warring with various nations. Though he lived to the age of 80, he was engaged with Mexican and American forces from the mid-1850s onward after Mexican troops slaughtered his family. He led his loyal followers for decades in a fight to prevent Mexican and American expansion into Apache territories in present-day Arizona.

Sitting Bull was a holy man and tribal chief to the Lakota Sioux, and he eventually became a symbol of resistance to the US federal government’s policies. It was Sitting Bull whose Lakota and allied tribal forces soundly defeated General George Custer’s US Army unit at Little Bighorn in Montana. Then there’s Crazy Horse, the leader of the Oglala Lakota who fought tirelessly to protect this tribe’s cultural traditions.

Options with the Indian Chief Release

Like the other silver rounds of the American Western Skulls Collection, you can buy silver with the Indian Chief design in 1 oz proof, antique, and colorized versions, as well as 5 oz proof, antique, and colorized options. Each one features a unique serial number engraved onto the edge of the rim and a matching Certificate of Authenticity with that same serial number. All rounds arrive inside of protective capsules.

The American Western Skulls Collection is coined by the Osborne Mint. Located in Cincinnati, Ohio, the Osborne Mint holds the prestigious title as the oldest operating private mint in the United States. The modern Osborne Mint can trace its roots back to the 1830s and an era when the US had paid off its national debt and still had no singular fiat currency accepted for commercial transactions.

We encourage JM Bullion customers to reach out to us with any questions. You can contact us on the phone at 800-276-6508, or you can connect with us online through our live chat and email features.